Construction on the Finland-Bethoven-Melwood project to capture stormwater runoff water has started, closing Finland for the next few months.
For any questions or concerns, please do not hesitate to contact Matthew Smuts, PWSA Construction Project Manager: (412) 255-8800 x2663  &  msmuts@pgh2o.com 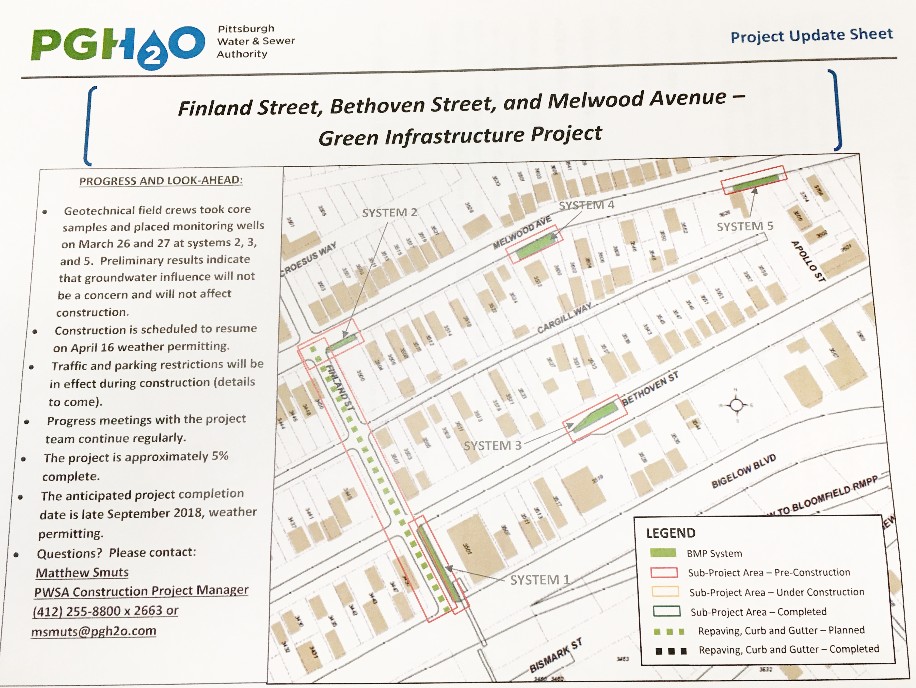 Abandoned cars on your street can be reported to 311. Our City Council office just confirmed that if the plates and tags are expired, a 311 report is how to get the vehicle on a towing list with the City. Thank you!

You can call 311, or use the online form at: http://pittsburghpa.gov/innovation-performance/311.html

Our PHCA newsletter published a special edition to share lead water information from PWSA, the City, and other resources.
Click here to read. 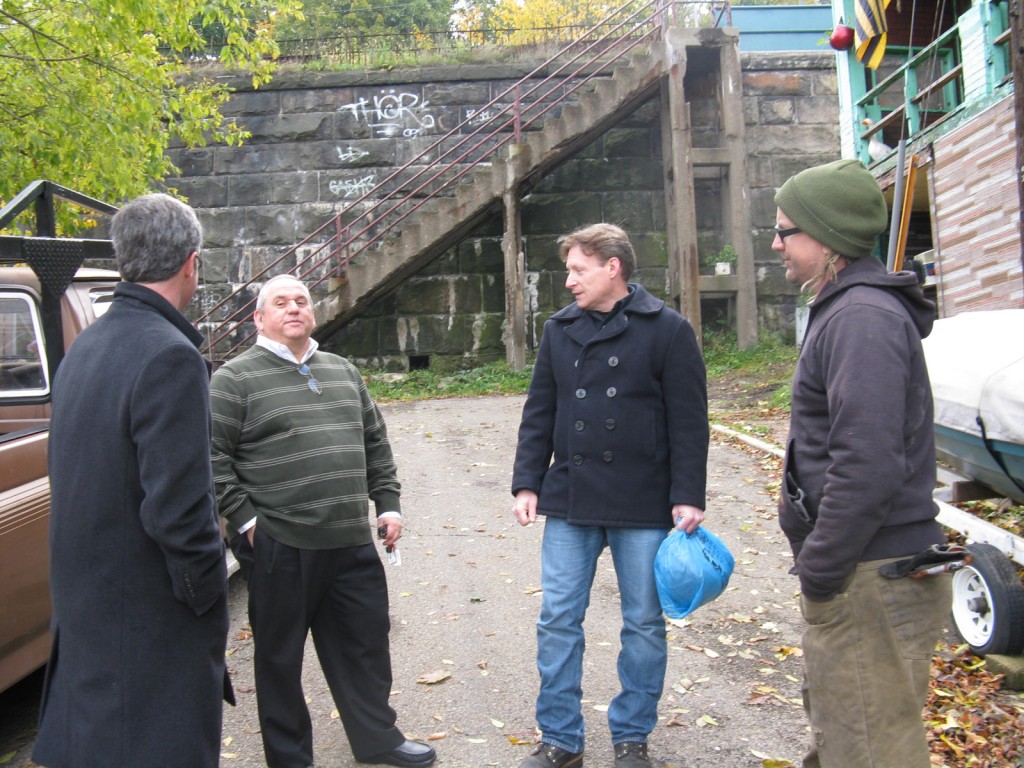 On Friday October 28, the PHCA met with Senator Jim Ferlo, Councilman Patrick Dowd, and representatives from PennDot to look at a section of Bigelow Boulevard.  During heavy rains or snow runoff, water pours over the retaining wall near the public stairs leading from Harding up to the bus stop on Bigelow.  Flooding at this spot has damaged a home on Harding Street below, owned by Evan Clark.

The flooding occurs because the road, in being repaved again and again over the years, is now higher than the small drain at this site.  There isn’t a gutter on the road to direct the water, so the excess floods the sidewalk and washes over the wall onto the home below. The City has already installed a section of solid metal fence above the home (seen just to the right of the stairs in the photo below), which has helped somewhat. 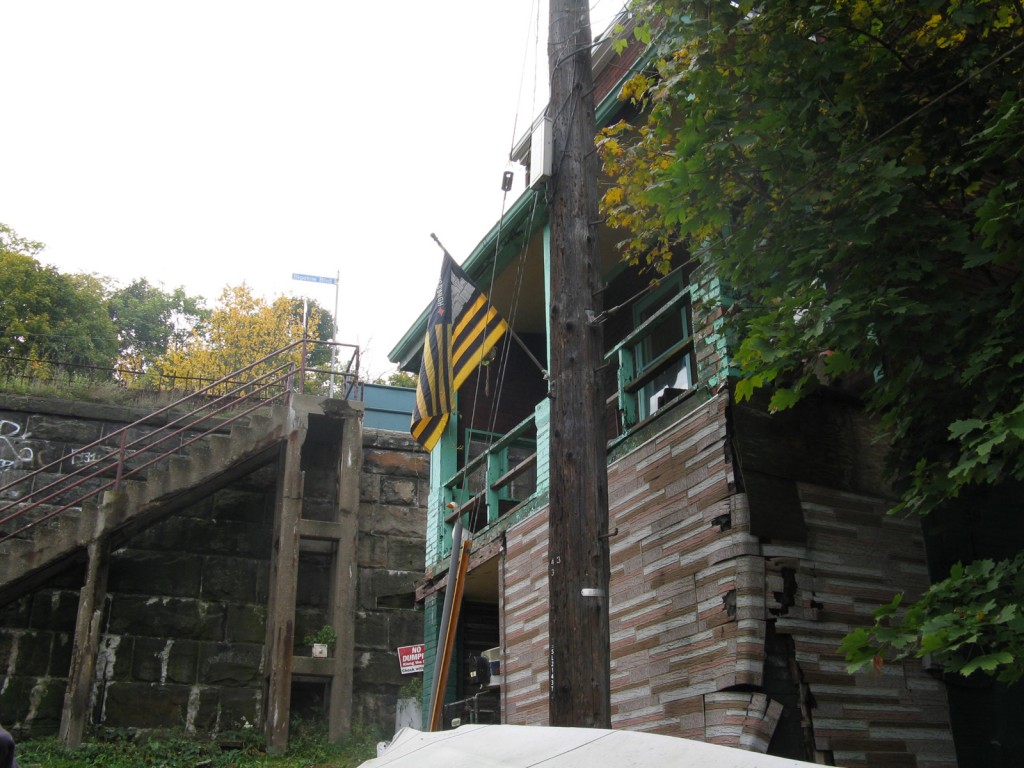 Another issue that was discussed during the meeting is that building owners along this stretch recently received letters telling them that they are responsible for maintaining the sidewalks on Bigelow.  These sidewalks are about 20 feet above their properties, on the other side of a wall owned by the City.  The consensus seemed to be that the City may actually be responsible for the sidewalks, since they abut City property (the wall), not private.

I’s rare to get so many public officials together for an on-site meeting such as this.  After the tragic flooding deaths in Highland Park in August, there is more awareness about the issues relating to storm water control.  And Bigelow Boulevard, which is a state road, has already been identified as one that will need to be overhauled at some point in the future.

Many people are not aware that Bigelow runs through Polish Hill from the Bloomfield Bridge to Frank Curto Park. (the border of Polish Hill is two blocks above the boulevard, on Ridgeway Street).  The Polish Hill Strategic Plan, which is nearly completed, includes Bigelow Boulevard as an area to be addressed.  Issues such as speeding, road conditions, sidewalks overgrown with weeds and brush, and the ever-increasing number of billboards are all concerns.  Traffic turning down into Polish Hill tends to stay at a higher speed through our narrow streets.  Solving these problems is complicated by the fact that this is a state road, and that Lamar owns a lot of the property on which they have billboards. 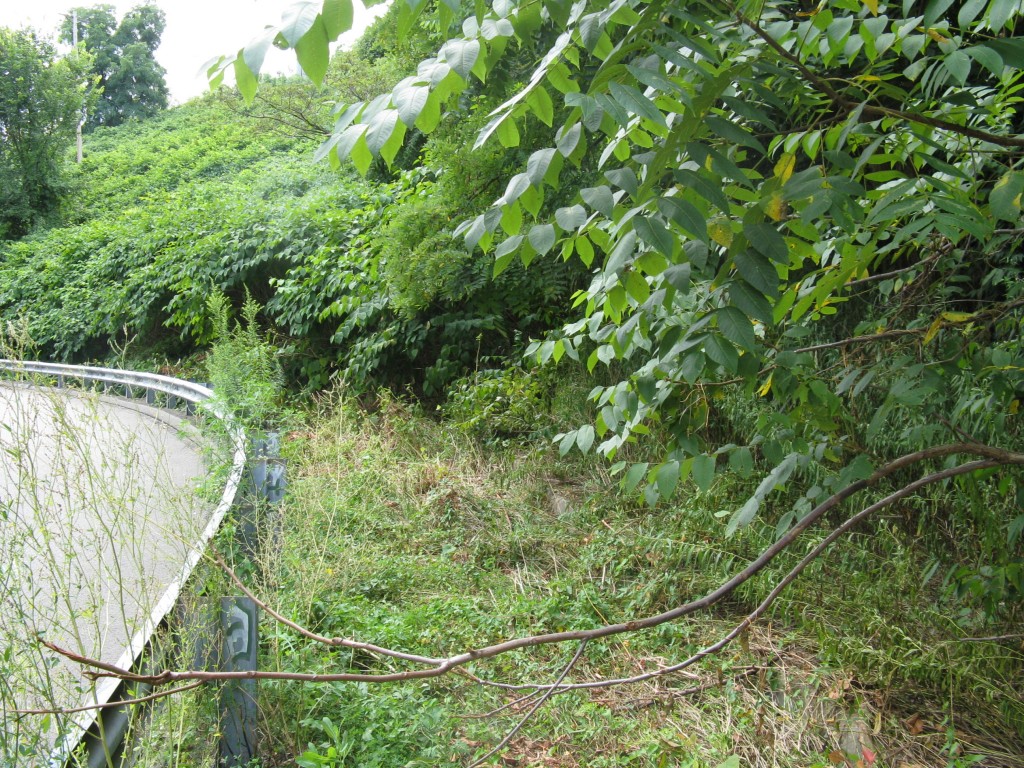 Those of you who walk or bike along Gold Way will have noticed that the sidewalk had become so overgrown that it was impassable.  Yes, there is actually a nice wide paved sidewalk to the right of that guardrail in the above photo!  But this summer, pedestrians have had no choice but to walk in the road–pretty scary, on a blind curve where cars regularly drive too fast.  Repeated 311 requests to have the sidewalk cleared went unaddressed, so we decided to start the process ourselves. 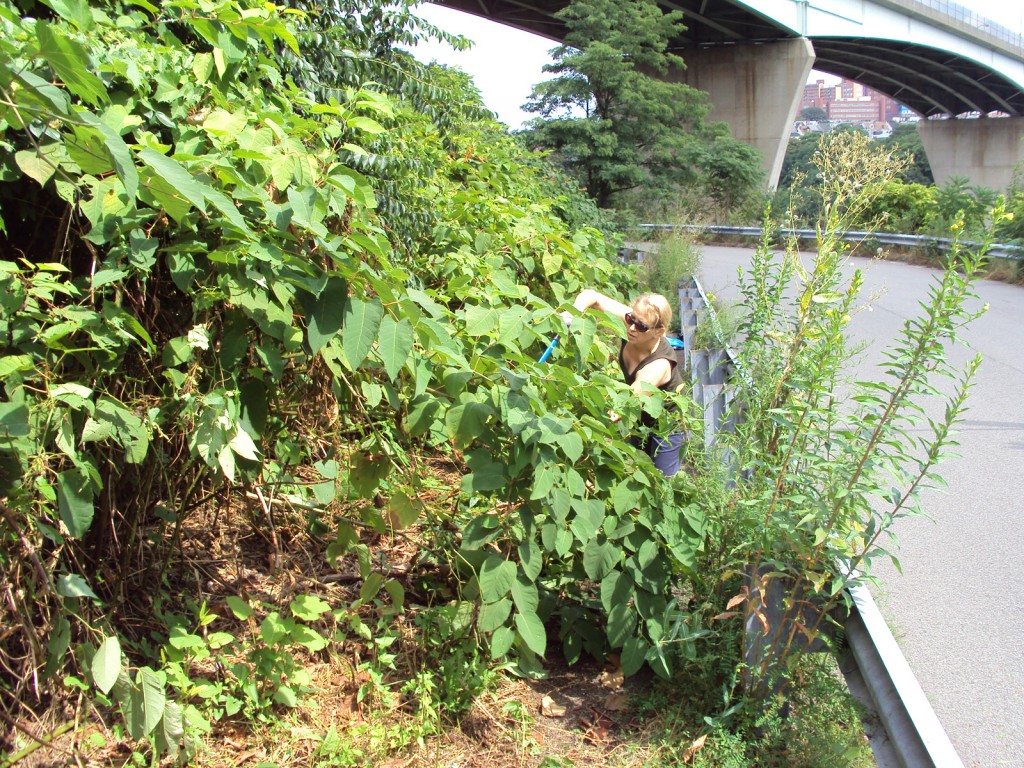 Gold Way is not actually part of Polish Hill (it’s Oakland), but it’s a gateway to our neighborhood and an essential footpath for our residents.  So, on Saturday, a small group from the Polish Hill Green Team spent a few hours to start the process of excavating the sidewalk.  Not only had the knotweed and other brush grown over the sidewalk, but the dead brush from the last time the City cleared the path many months ago was left where it fell.  Someone had also dumped bags of waste from a building demolition. 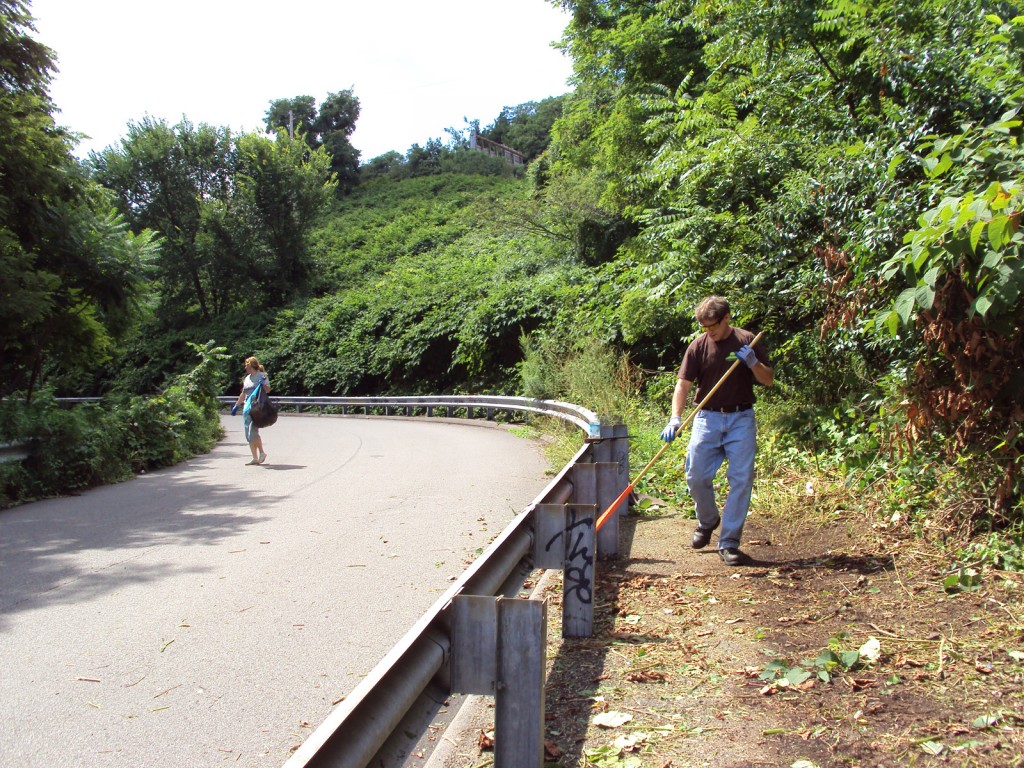 A pedestrian who came along while the crew were working said that he was not aware there was a sidewalk along this road!  The Green Team crew spent a few hours cutting brush, knotweed, and cleared a long section of sidewalk to provide a guide for the City crews.  We have sent a request to the City to finish the job and clear the cut materials from the sidewalk.  We’ll let you know how that goes. 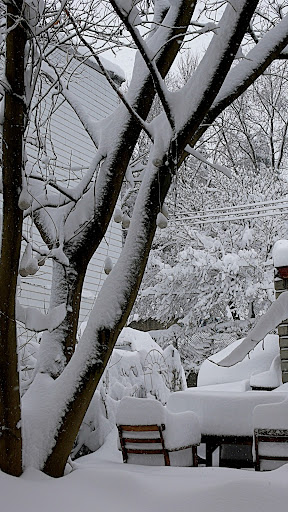 Neighborhood snow removal “blitzes” will continue throughout the City today and through the weekend as needed. Today crews are focused on the Regent Square, Point Breeze, and Beechview neighborhoods. Crews will also be working in all neighborhoods hitting streets that are in the worst condition, working from a list compiled from 311 calls and the police and fire bureau.

Duquesne Light has informed the City of Pittsburgh that all customers affected by the snow storms should have power restored as of noon today. If a customer isn’t home, the company asks that they check with a neighbor to see if power has been restored. Should they find power still out, they are asked to please call 1-888-393-7000 or visit www.duquesnelight.com.

The Parking Authority will not be enforcing fees or citations on authority parking meters or surface lots until Tuesday.

City Services
Refuse collection will resume its regular schedule Monday. Recycling collection is still suspended until further notice. Residents are asked to hold on to their recyclables or drop them off at one of the City’s recycling drop-off centers.

Just a couple hours ago, members of the No. 3 station house were on Brereton, lending their aid to dig out snow-enveloped cars and sidewalks. Staffski stepped outside of the protection of the office to say hello and thank you. The gentlemen reminded me that residents in need of assistance should call the 311 non-emergency help line. They were working from a list of requests for senior citizens and less able bodied individuals for assistance with clearing access. One of the crew remarked that the National Guard is also on hand to help get people to Doctor appointments. Please, if you know of any individuals among your neighbors that might need assistance, make sure that they know to contact the 311 response line. If you can assist them with internet access in filling out the online form, it might save some time and frustration in the long run. The 311 call center is doing all it can to keep up with the number of requests but there might be a wait to talk to someone.

The PWSA crew was out in force today on Polish Hill. It seems that they aren’t waiting for spring cleaning! Staffski stepped out the door and up the walk to Phelan today and was pleased to see this wonderful crew operating this huge machine — 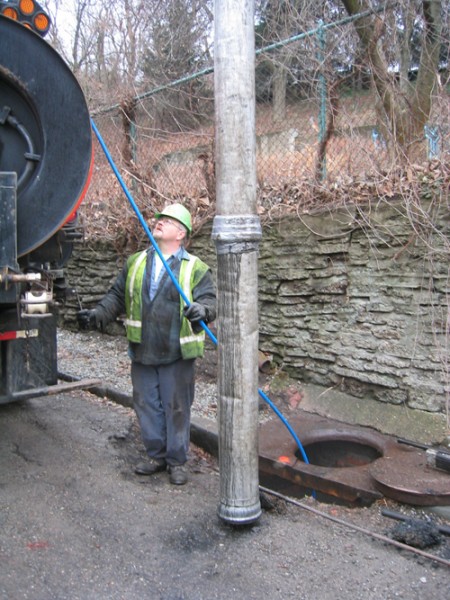 The crew, led by Eric Taper, have cleared storm drains on Phelan and will be addressing drains on 30th and Brereton. All of this in response to 311 alerts submitted by residents in Polish Hill. It’s a lot of hard work and it has been a long time since these particular drains have been addressed. The crew pulled the remnants of an 8-track cassette out of the drain. How’s that for a blast from the past: 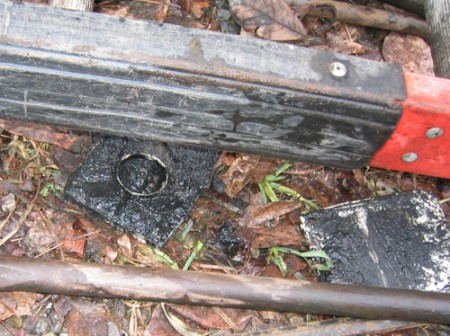 There was also a lot of pretty hefty debris, like the asphalt and bricks pulled from two of the storm drains. The mud and lighter debris was pulled out with their equipment — 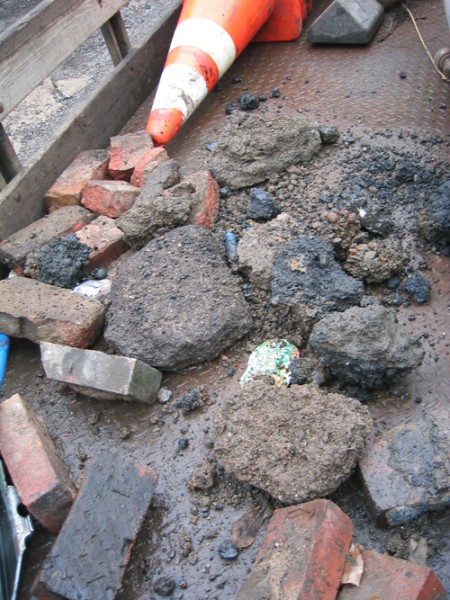 So, Staffski offers her gratitude to Eric Taper and his crew for their work in Polish Hill on this cold and dreary day. Hats off to you, gentlemen.

Every neighborhood has a few empty houses. With the change of the season, now is an time to keep an eye on the vacant or abandoned properties that may be on your block. These structures can be a tempting shelter for either man or beast. If you live next to such a structure keep an eye open for doors or windows that might recently be left open. If you happen to own such a property please make sure for every ones safety that the structure is secured from determined or casual entry. Reducing the blight associated with vacant and abandoned properties increases every residents’ quality of life. Remember the more information we are able to report to the authorities on these structures the more results we will see.

The Mayor’s 311 hot line and e-mail form are always a good way to make sure that the Police, BBI, and all city departments are aware of health, safety and security concerns.

If you own an iPhone, you can now download a free application for reporting and cataloging citizen complaints.  The application, called iBurgh, allows residents to snap iPhone photos of problems such as potholes and graffiti and send them to the city’s 311 complaint system, embedded with Global Positioning System data with the problem’s exact location. The free application, designed by YinzCam Inc. of Squirrel Hill, will issue the reports to city departments for review, just as the city’s current 311 complaint phone line does.

The iBurgh application is currently only available for use on iPhones, but will be expanded for use on most other smart phones soon. Users of iPhones can find it through the “App Store” application on their phones or via http://appshopper.com/utilities/iburgh.