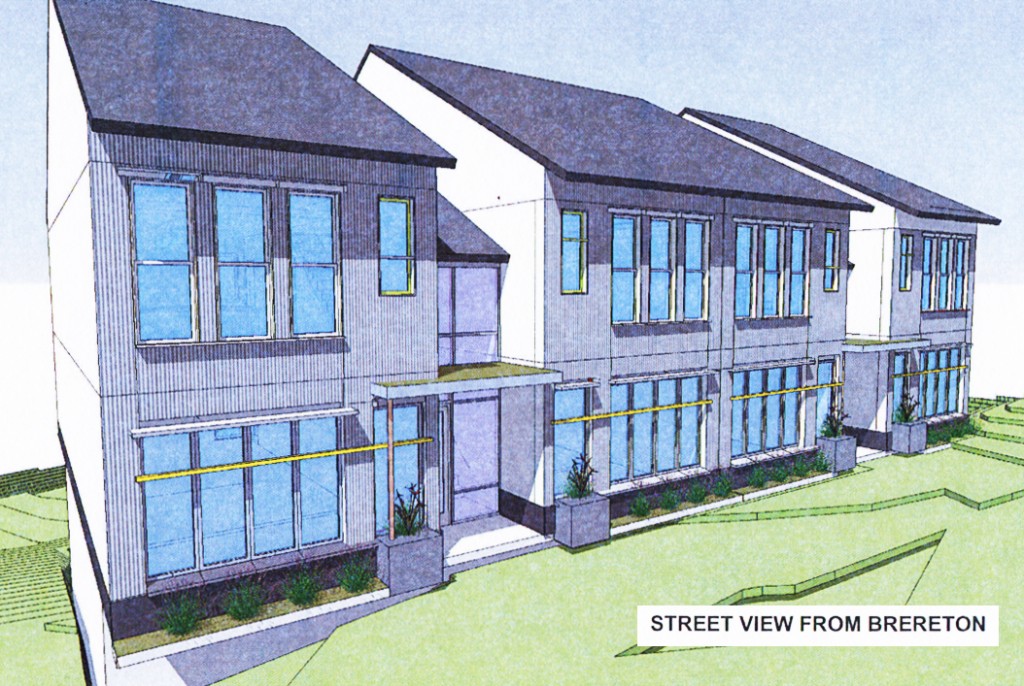 Architects Pfaffmann + Associates presented the preliminary drawings for the Fire Site Development at the September 2 community meeting.  The slideshow of images included building plans, elevations, and projections of what the buildings will look in context with the rest of the surrounding buildings on Brereton and Dobson streets. 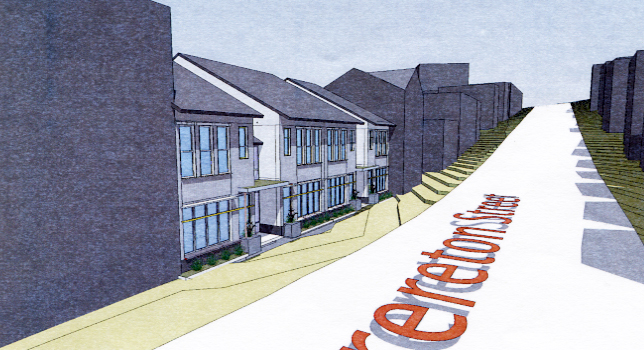 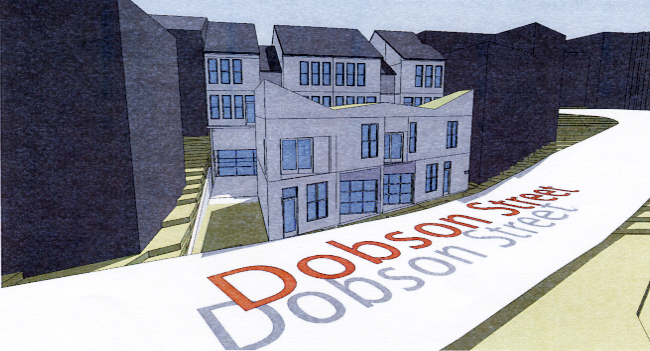 The development includes two for-sale units on Dobson Street and rental units on Brereton that will convert to for-sale buildings several years after construction.  These drawings are not exactly what the buildings will look like; still to be determined are details like siding, colors, trim, and plantings.   Factors in the design process included the limitations of the small, steep site, the need for off-street parking, and input from Polish Hill residents. 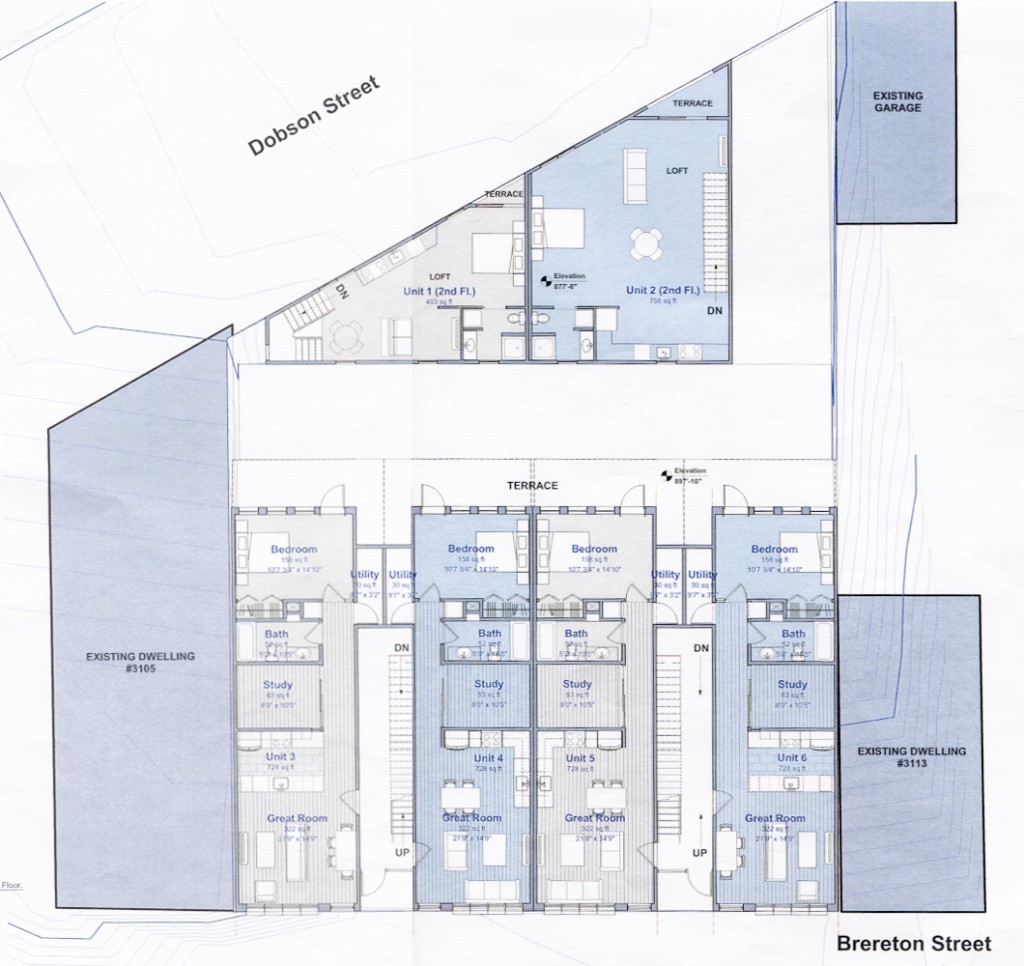 Now, the developer will begin working to secure financing for the project.  Next are approvals, permits, and site preparation.  Although there is already interest from people who would like to rent or buy, there will be no pre-sales until the actual construction begins, probably next summer.

See the article from the Summer-Fall Polish Hill Voice for more details on the plans. 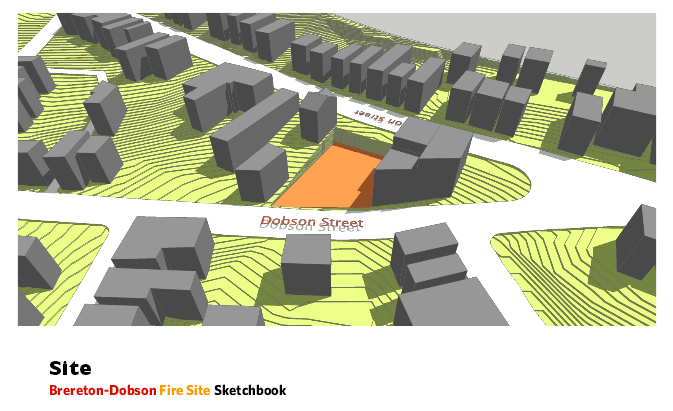 The final community meeting for the Brereton Dobson Fire Site Development took place on Tuesday, March 11. At the meeting, Fire Site steering committee members explained how community input from the two previous meetings and two workshops resulted in a proposal that is a hybrid of different suggestions from residents .  Attendees gave feedback on sketches and 3D models  depicting what the units could look like with 3, 4, 6 or 8 rental micro units on Brereton Street and 2 for-sale live/work units on Dobson Street.  Attendees then participated in breakout sessions that discussed density/ownership structure and look and feel of the development.  The meeting wrapped up with a full group community feedback session.

At the meeting, the architect shared a sketch booklet of slides that showed  how community input was narrowed down to several different density options.  Those who were not able to attend the meeting can click here to view the Brereton Dobson Fire Site Sketch Booklet.

The Fire Site Steering Committee is currently reviewing all the input from the Polish Hill Community Plan, market study, interviews with Polish Hill residents, creative Polish Hill identity workshop, three community meetings, online feedback and other input.  The Steering Committee will make a recommendation to the property owners (Pittsburgh Housing Development Corporation) on whether or not to proceed with this architect/developer team and their sketches.

Find out what kinds of buildings are planned for the Fire Site!

The third public meeting for the Fire Site Development will take place at Pittsburgh Filmmakers, at 477 Melwood Avenue just outside Polish Hill, on Tuesday, March 11 from 6:00 – 8:00 p.m.

Ask questions, share your impressions, and learn about how your input was incorporated into the final design.  This is the third and final public meeting, and the last meeting before the developer decides whether to move forward with buying the land and building anything there. 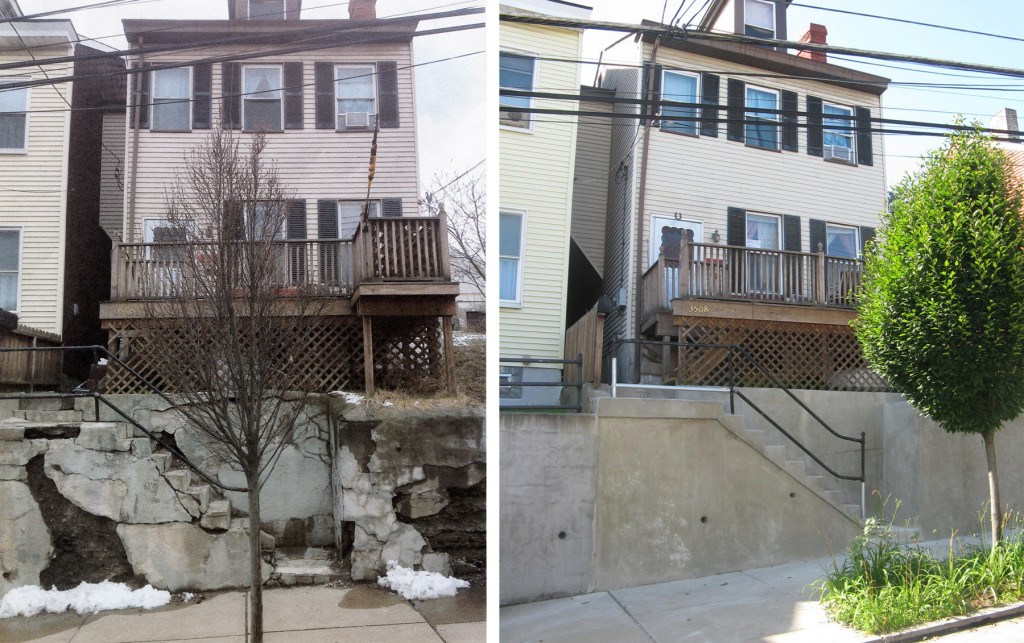 Questions about your Pivotal Streets Facade Renovation Grant application?  Need advice to make your application a real winner?  Come to Lili Cafe to get more information for homeowners interested in applying for the Polish Hill Pivotal Streets Facade Renovation Grant.  Kalie Pierce, Leslie Clague and Alexis Miller will be at Lili Cafe on Monday, February 17 from 6-8 p.m. and Saturday, March 1 from noon to 2 p.m. Drop in any time!  We’d love to talk about your project.

The goal is for homeowners to learn how they can make a strong application and tips on working with contractors.  PHCA staff/board members will provide advice, and we’ll have application forms and other grant materials. Kalie Pierce, a grant winner from last year, will be on hand to share her experience.  If you have photos of your house or a draft of your application, bring them along, or just bring a pen and paper to take some notes.  For more information call 412.681.1950, or email us at phca@phcapgh.org. 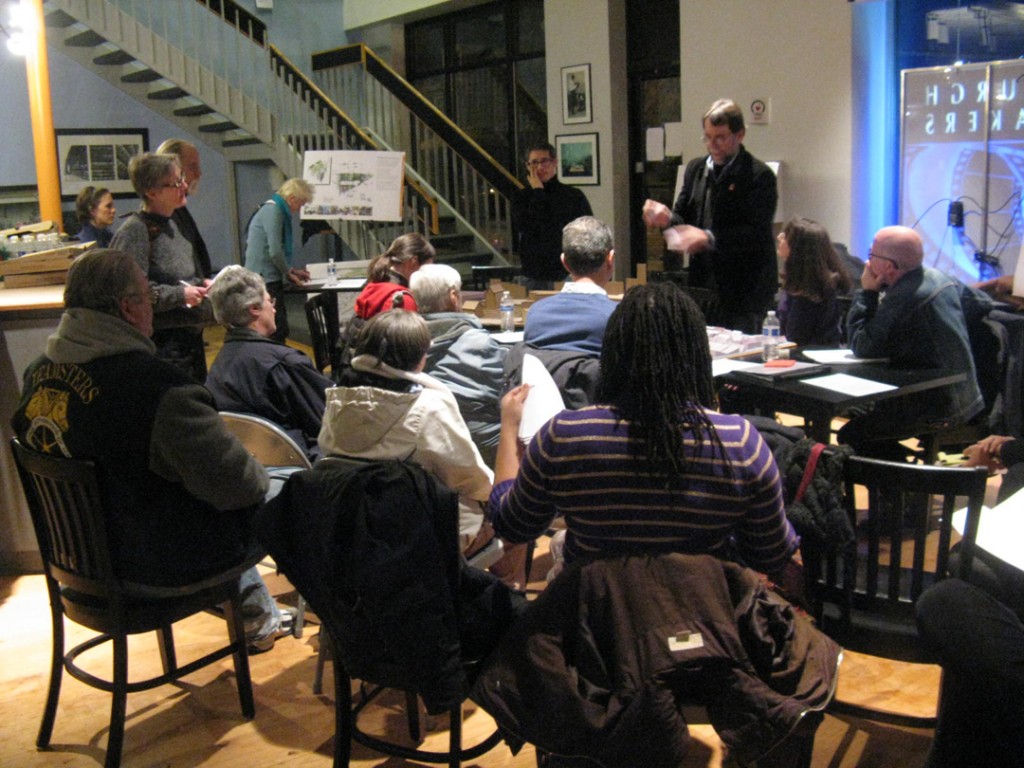 Over thirty people turned out on a frigid evening for the second public meeting about the fire site development.  After a brief introduction, the attendees were divided into three sections, cycling between three spaces for smaller discussion groups. 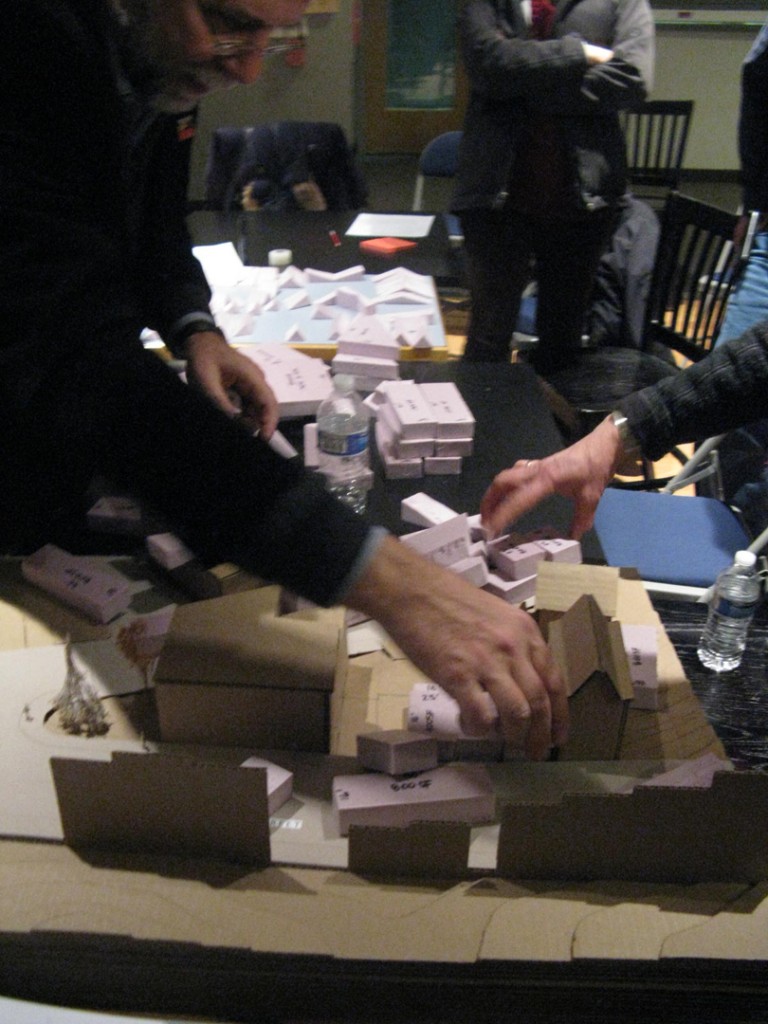 One discussion was about site design, where attendees learned about the physical layout of the fire site and what could be built there.  Architects Pfaffmann + Associates provided a scale model of the site and foam shapes representing possible unit sizes.  Residents could see what different configurations might look like on the site. 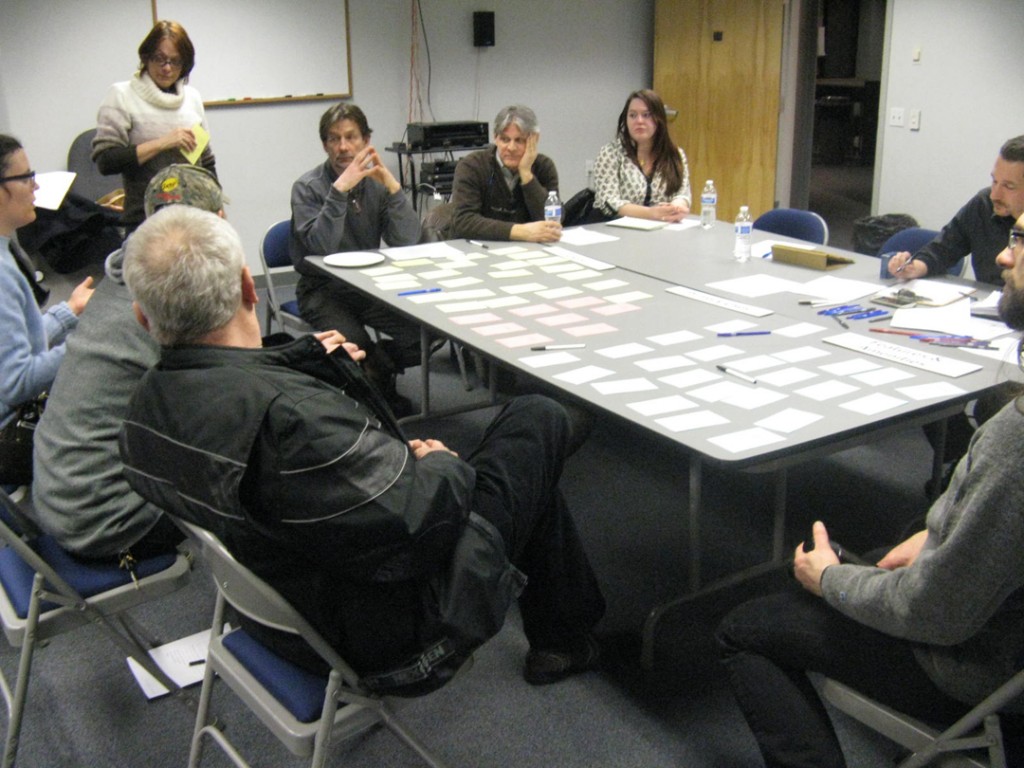 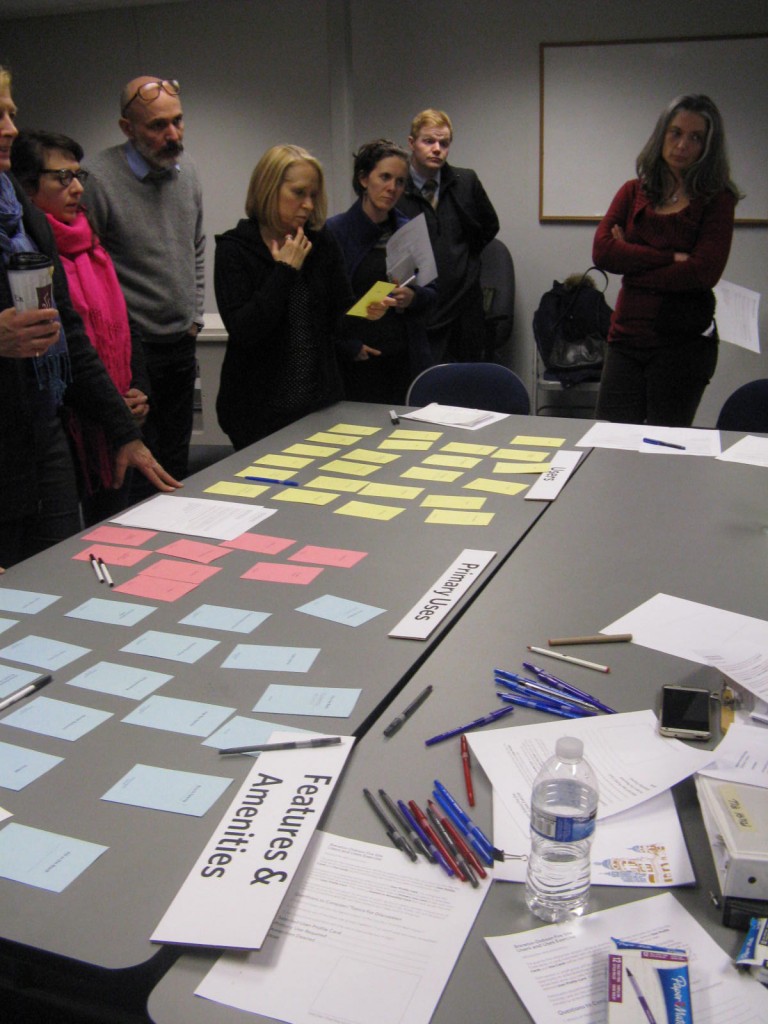 In the Users and Uses discussion, the subject was who might be the potential residents, and what kinds of commercial development might be possible.  Residents could also talk about what kinds of features or amenities they’d like to see as part of the development. 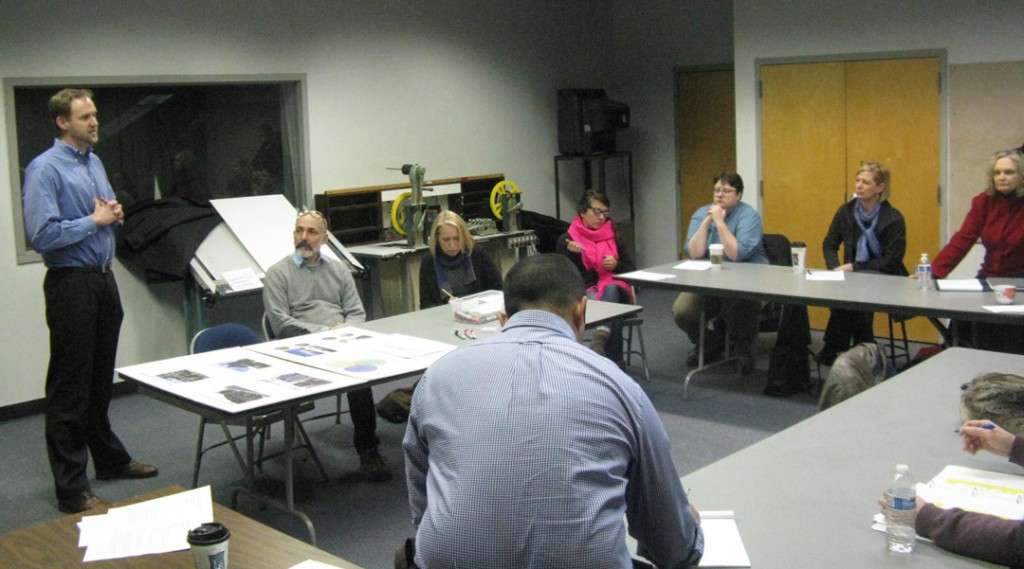 In the Economics discussion, residents learned about the underlying economics of developing the site — the financial realities that would have a bearing on what could be built.

Some people wished that a little grocery store or laundry would open at the site.  As they stated at the first public meeting, the developer and architect told attendees that if prospective business owners are interested in the site, this is the time to come forward and make a commitment. 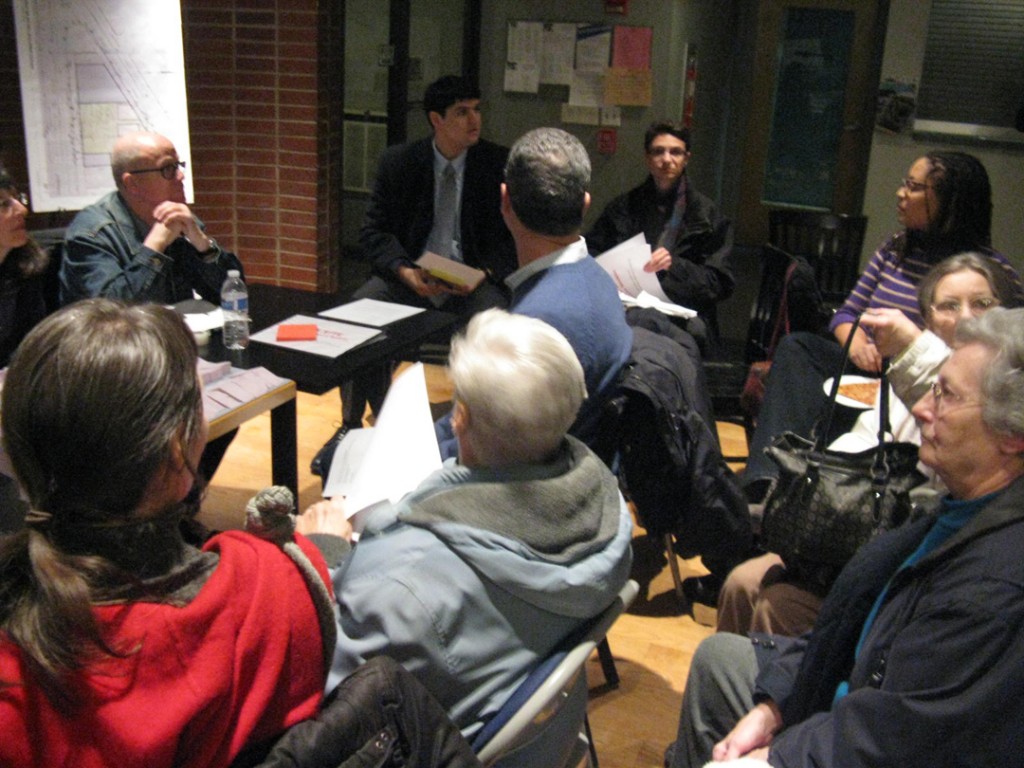 Some people wanted rental units or live/work spaces; others wanted to see just three single family homes on the site.  Others wanted some public green space.  The architects noted the opinions and feedback. 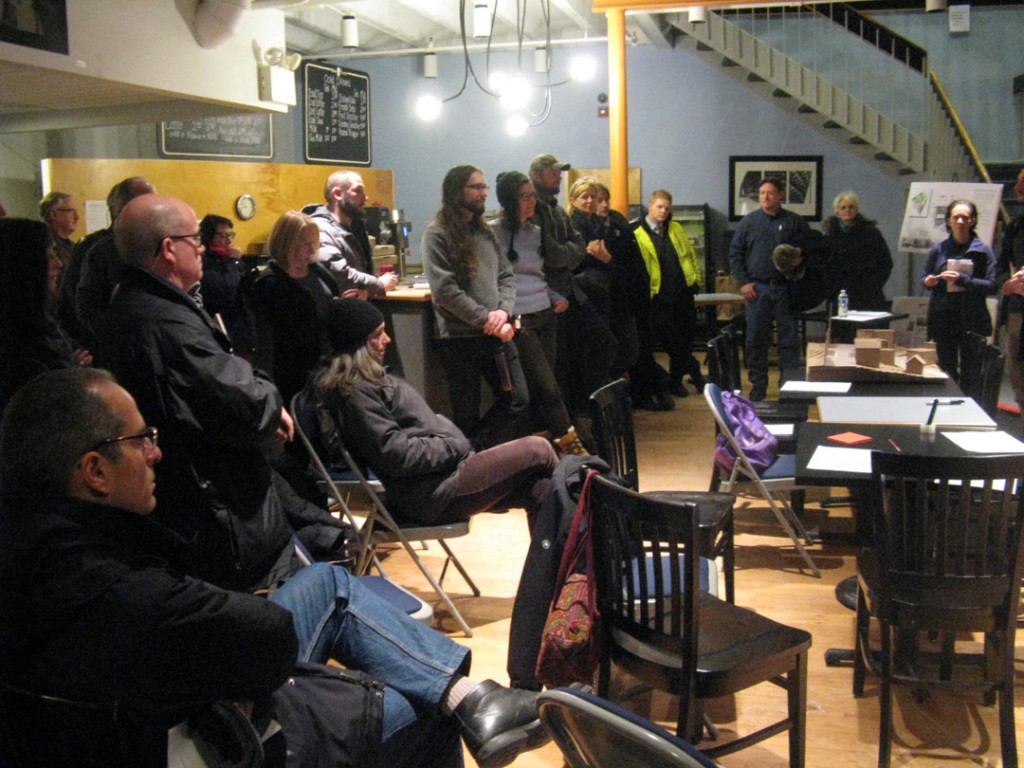 After the attendees had gone through all three discussions, they reassembled for a final group discussion.  Now, the architects will take the input they received at this meeting and create drawings of various design possibilities for the site.  At the next public meeting, which will take place sometime in March, they will present the drawings and seek another round of community feedback.

For another viewpoint on the meeting, read Diana Nelson-Jones’ article in the Post-Gazette.

This is  the second in a series of public-input sessions focused on the Fire Site.  This meeting will feature three interactive workshops (25 minutes each) for sharing more about the project’s process and next steps and gathering community input:

Attendees will split into three smaller groups so the sessions are more interactive. Attendees will then rotate through and participate in all three workshops. At the end, we’ll get together as one big group to discuss and recap.

The Fire Site is located in the 3100 block of Brereton and Dobson Streets in the heart of Polish Hill and consists of three parcels of land.  The site is owned by the Pittsburgh Housing Development Corporation, an affiliate of the Urban Redevelopment Authority of the City of Pittsburgh. 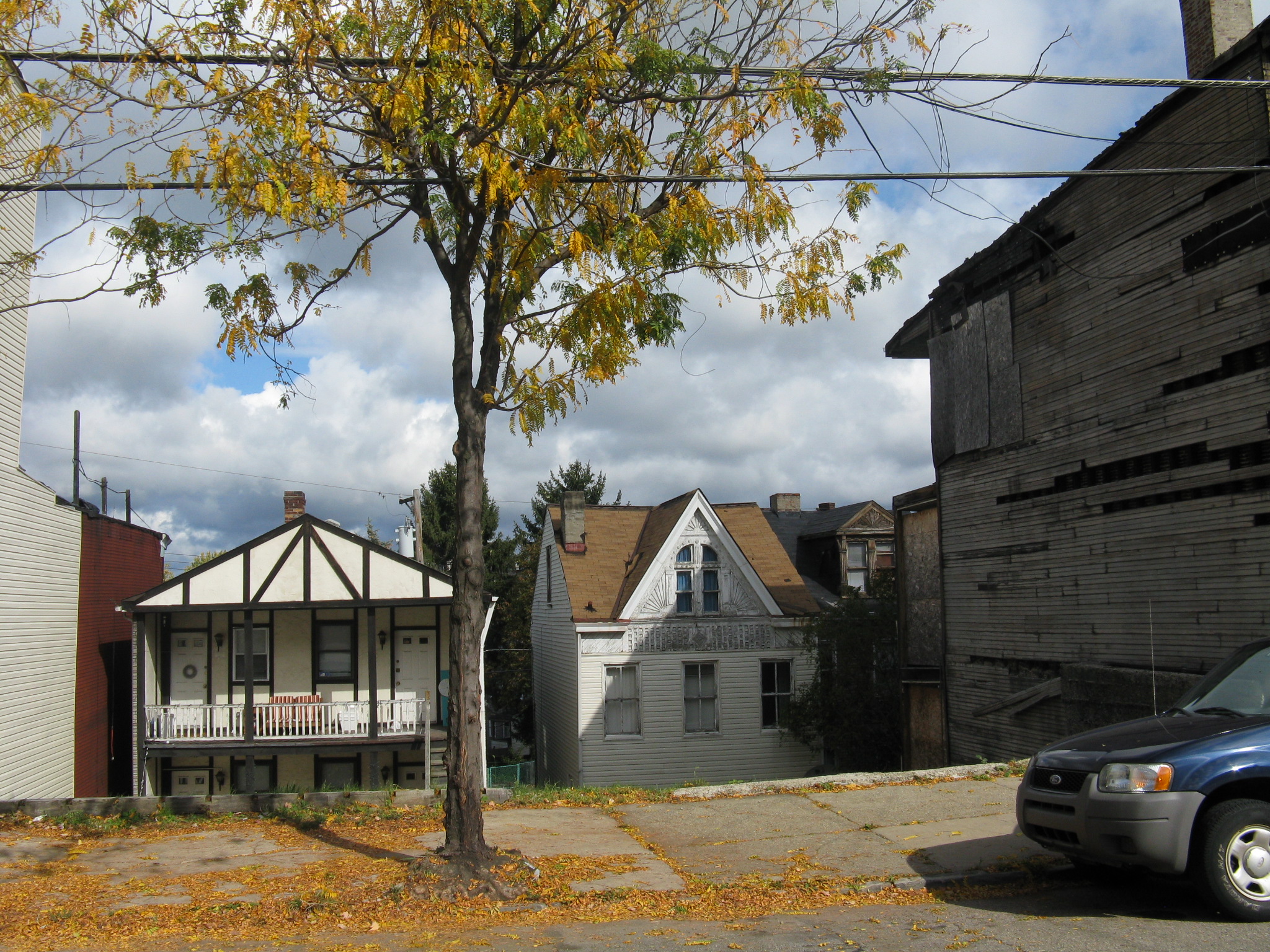 At the November community meeting, on Wednesday the 6, the discussion will focus on the fire site development.  The team selected to develop the site will be on hand to introduce themselves to residents.  We’ll sketch out the next steps in planning, and residents can share their thoughts.

The meeting is on the lower level of the West Penn Recreation Center, 450 30th Street, and will start at 6:30 p.m.

The Urban Redevelopment Authority of Pittsburgh has informed us that the application period is still open for their facade renovation grant program.  The program is available to six neighborhoods in Pittsburgh:  Arlington, Central Northside, Garfield, Manchester, Upper Hill District, and Polish Hill.

The grant is an up-to-$5,000 matching grant for eligible owners to fix up the facade (front) of their residential property.  The grant pays up to 50% of the total project costs up to a $5,000 maximum.

There does not appear to be any information about this program on the URA website.  We have an informational flier at the PHCA office.  For more information, contact Quianna Wasler of the URA at 412.255.6550, or email her at qwasler@ura.org.

Sarneys bar, at 3055 Brereton Street, a longtime Polish Hill establishment, is in the process of changing hands.  The new owners will be coming to Polish Hill on Monday, July 29 at 6:00 p.m.  for a public meeting to discuss their plans for the property and to answer any questions that residents might have.  The meeting will held at the PHCA office. 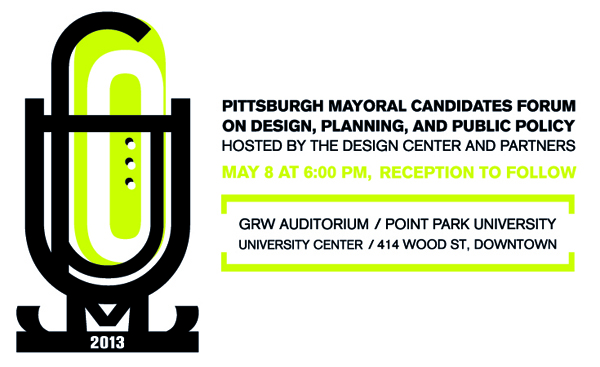 The Design Center invites all interested citizens to attend the Mayoral Candidates Forum on Design, Planning, and Public Policy on Wednesday, May 8 at Point Park University’s GRW Auditorium in University Center at 414 Wood Street, downtown.  The 90-minute program begins at 6:00 pm, with a reception following at 7:30 pm.

Candidates Bill Peduto, A.J. Richardson, Jack Wagner, and Jake Wheatley are confirmed to participate in the forum.  The first question—How will you ensure that your administration’s public policy makes good design and planning central to the City’s growth?—will serve as the candidates’ opening statement.  Answers to all questions will be limited to two minutes, with a closing statement of one minute.  Questions on topics such as blight and vacant properties, historic preservation, riverfronts, multi-modal transportation, and others will be taken from the audience as well as crafted in advance by the Design Center.

The Mayoral Candidates Forum on Design, Planning, and Public Policy is open to the public, but seating is limited.  Those interested in attending must RSVP to design@judith-kelly.com or at 412.281.0995.  The Forum is a project of Design Allies, an education and advocacy program of the Design Center that connects people with design and planning ideas by engaging them with public policy issues, offers lecture, film, and educational opportunities, and promotes dialogue via social media. For more information, visit designcenterpgh.org or facebook.com/DesignAllies.