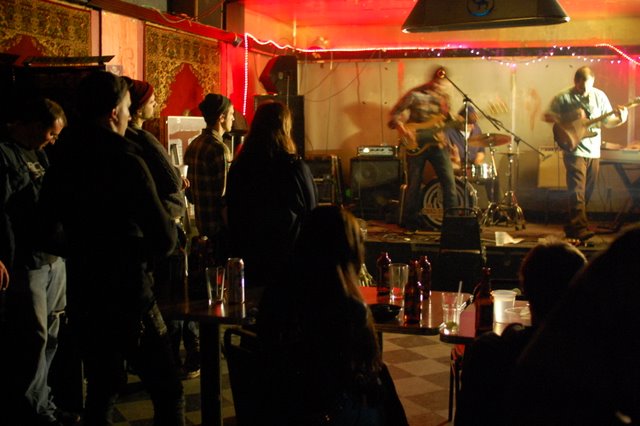 Gooski’s was really jumping on December 18, when Polish Hillarians descended on the neighborhood venue for a much-anticipated night of entertainment.House of Assassins, Chad Sipes Stereo and joy toujours and the toys du jour were, as you would expect, mesmerizing! The evening was arranged to support one of PHCA’s efforts, the building of a Community Bread Oven in Polish Hill.

PHCA’s very own Leah Durand is working on the project. Terry Doloughty and Catherine McConnell came out to show their support and enjoy the evening’s entertainment and the company of our many supporters. Thank you all for coming! Here’s a little slideshow from the evening, compliments of Mark Knobil, photographer extraordinaire!

Have no fear that you missed out on the party. We will be back with another evening’s entertainment in February. So save February 26 for —

a silly little
TALENT SHOW
… and other shenanigans

You can also find out more about the PHCA’s efforts for the bread oven here.

Bands for Bread = Community Bread Oven in Polish Hill
Many, many thanks to Gooski’s, House of Assassins, The Chad Sipes Stereo and joy toujours and the toys du jour

Gooski’s is the perfect dive bar in the Polish Hill section of Pittsburgh.

Gooski’s is located at 3117 Brereton St. in Polish Hill

We are pleased that House of Assassins will be joining us for the evening. In a review for Your Days are Numbered, indieville says —

This impressive slab of vinyl brings me back to the glory days of underground rock. Pittsburgh’s The House of Assassins weave pedal steel into hard-boned rock ala The Dream Syndicate, Dead Moon, and Killdozer. Perhaps it’s the vinyl talking, but this is the type of thing I’d expect to find reviewed in Puncture or Option circa the late eighties. Side A combines raunchy guitars and rough, Michael Gerald-meets-Steve Wynn vocals to produce gritty rock music inflected with a country flair. The proceedings have a dishevelled quality to them, attacking the ears like a toaster dragged under a bus. This means the emphasis is on chaos rather than melody, although the songs are sufficiently hook-y to achieve the warmth of familiarity over repeated encounters.

Local favorite, The Chad Sipes Stereo, will also be playing at Gooski’s for the fundraiser. The following is from the album notes for A Working Life —

Formed in Pittsburgh, Pennsylvania in early 2005, The Chad Sipes Stereo was built around the vision of second-generation contractor Chad Sipes. He set out to form a band that embodied what he was experiencing in his everyday life; the wind in his face, the sweat on his brow, the mud on his boots, and the beauty of the world from high atop a ladder. It is this unique worldview that is the creative force behind The Chad Sipes Stereo.

You can read more about the album on CD Baby. Along with the MySpace page, Chad Sipes Stereo has their own site here.

joy toujours and the toys du jour play mixed folkcore, i.e. you-are-beautiful-core, or music you can play while your four year old is sleeping

joy toujours is Project 53, Polish Hill’s musician resource center, located on Melwood Ave. We are happy for his support at many of the events on Polish Hill. He played for us at the PHCA 40th Anniversary Party and played an event at the West Penn Recreation Center pool. Thanks, joy, for all of your efforts.

Joy Toujours programs Belvedere’s in Lawrenceville. He lives on Polish Hill, has a 5-year old daughter, and lived as a hobo for six years. He wrote into Locally Toned saying that his idea was “from a song I wrote with the ukelele and the clip says ‘If you dont like today there’s always tomorrow, if you don’t like the rain you’re always just a sunny day away.’ Pittsburgh = rain = I think this is local enough, plus it was written by a local songwriter, plus I busk on the streets of Pittsburgh frequently, so it is technically a sound you would hear in our ‘nature.’ If we record I would suggest somewhere downtown to catch traffic and conversation in the background.” From Locally Toned 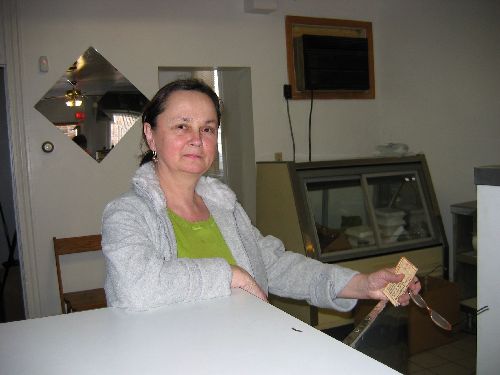 So, more time for you to go in and say hello, witamy and pick up some of your favorite treats!

The Deli is located at —

The recent fire on Ridgeway Street devastated the home of a long-time resident of Polish Hill; Mr. Eugene Wind. His impact on Pittsburgh this holiday season is very visible —

The 36-foot Colorado blue spruce that stands as the backdrop to the statue of the late Mayor Richard Caliguiri in front of the City-County Building this holiday season was donated, after some hesitation, by 82-year-old Eugene Wind. Read the Post Gazette article

Mr. Wind’s home caught fire from a neighboring property on Monday December 1. He has lost his home of thirty years to the fire. Please stay tuned. The Post Gazette article mentioned the possibility of a fund to assist Mr. Wind in recovering basic household goods.