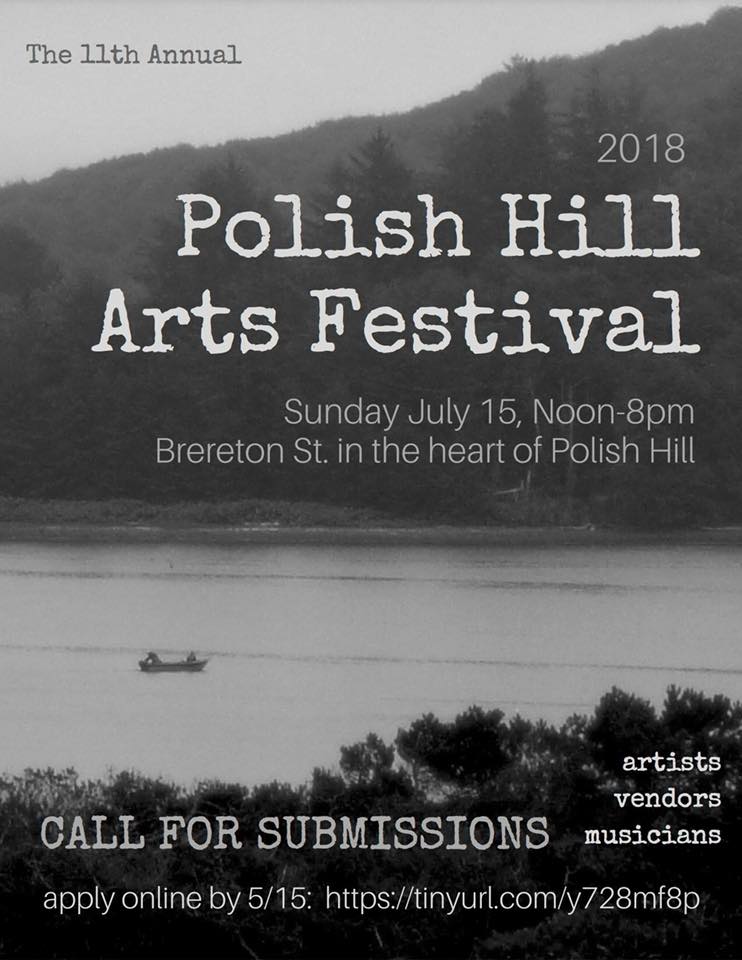 We’ll have a flurry of Green Team events in the first week of May:

We hope to see you there to help get the neighborhood ready for the summer season! 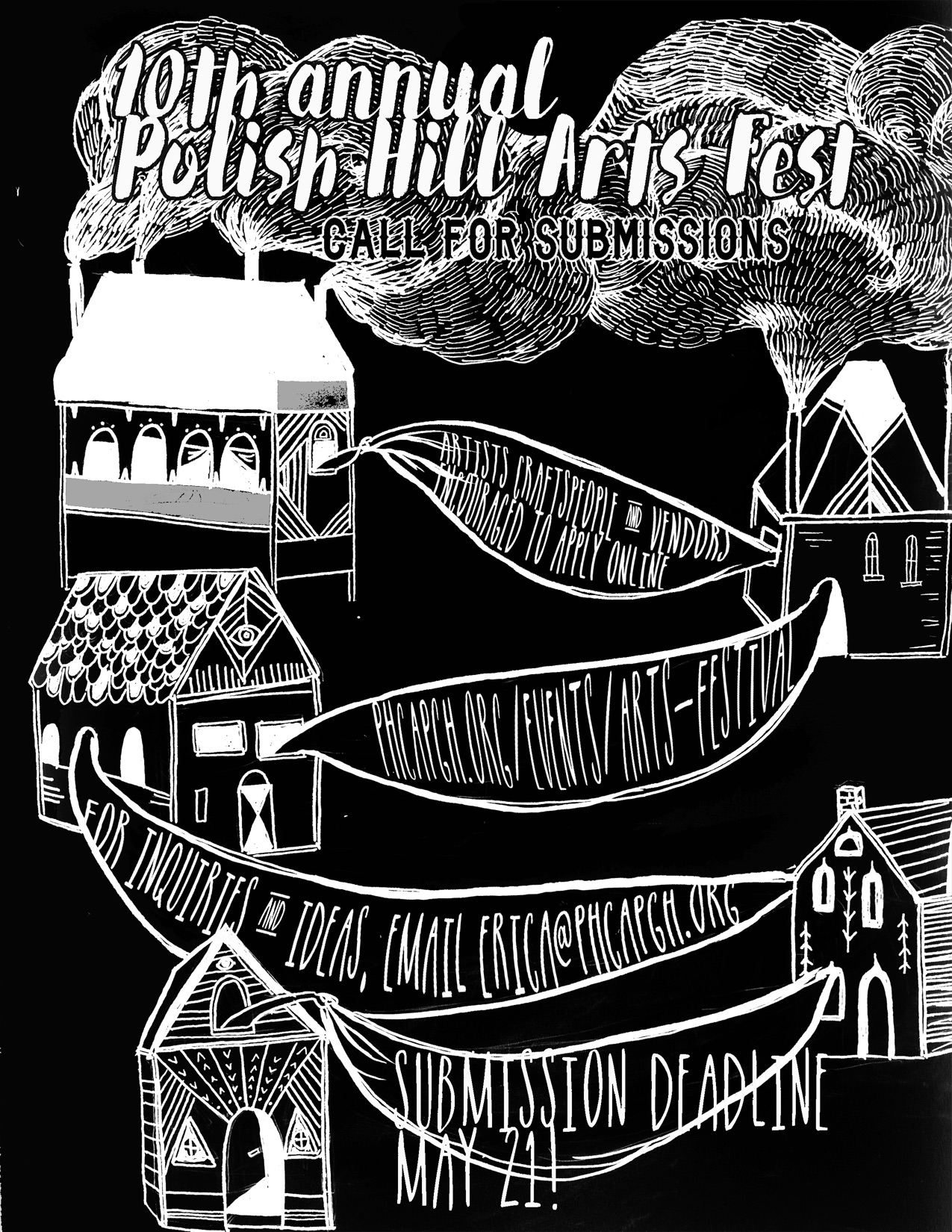 The Polish Hill Arts Fest is one of the city’s liveliest summer events. The Fest attracts people of all ages from across the city and includes a broad range of vendors from fine craftspeople to young, local artists. Live music, unique performances and fun activities for the kiddos. Plus, we always have amazing local food vendors. This year, for the first time, the Arts Fest is 100% volunteer-run. And (as always) we look to you to help us make it happen.

If you would like to participate in the the fun, as an artist or vendor, please reveal your interest through the following link :

Eat In or Take Out on:

The PHCA has created a new committee – the Diversity and Inclusion Committee, with a kick-off meeting on Tuesday September 23 from 6:30 – 8:30 p.m. at the PHCA office at 3060 Brereton Street.

The goal of the committee is to encourage our increasingly diverse neighborhood to work well together — respecting, appreciating and valuing our differences in background, ethnicity, lifestyle and culture. The need for this became clear after some unfortunate harassment incidents that seemed to be fueled by intolerance for cultural and lifestyle differences. between residents.

The committee is being established to not only raise awareness about the benefits of inclusion and diversity and remind folks to get along, but also to put our stake in the sand as to what kind of neighborhood that we all want Polish Hill to be!

At this kick-off meeting, we’ll discuss this topic and start brainstorming what we want to do.  Possible projects could include an event, an art project, or a marketing campaign. If these issues are of particular interest, if you believe civility and respect to the others who live around you is essential, your participation is welcome. Come help us to explore the possibilities of how to make Polish Hill a more accepting, respectful neighborhood. If you have any questions, or if you are not able to attend but wish to be involved with these issues, please get in touch. Email phca@phcapgh.org, or call us at 412.681.1950. 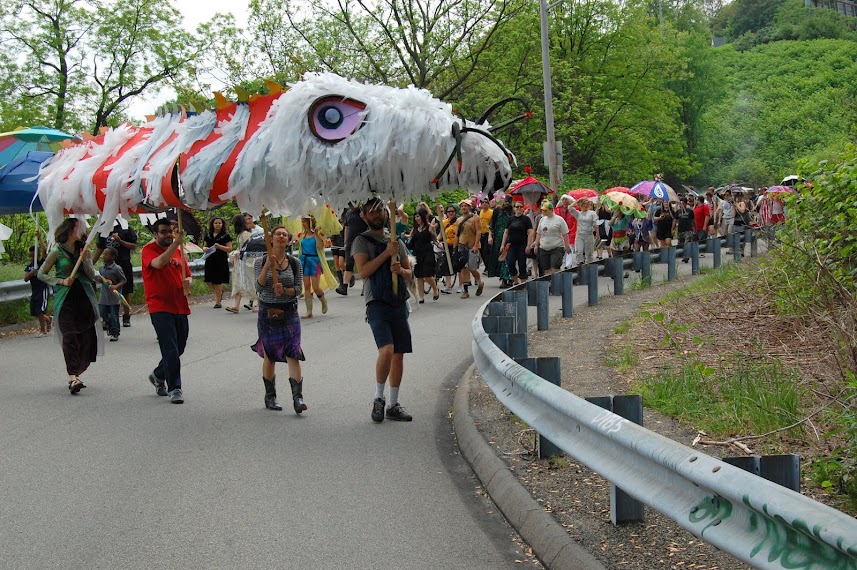 The May Day Parade is organized by an independent group of Polish Hill musicians and artists.  Now in its fifth year, the parade has become a new Polish Hill tradition.  Residents step outside to watch the procession of bright costumes, floats, and — of course — lots of kids. 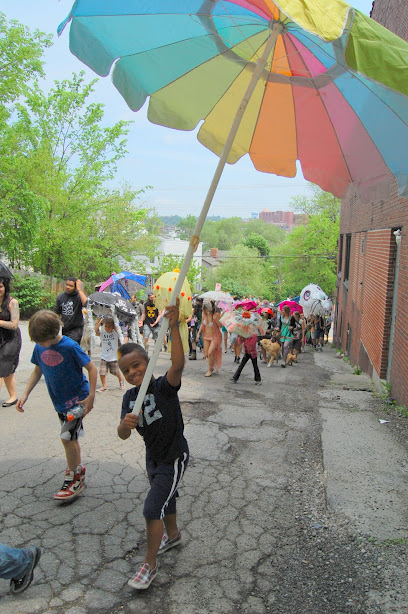 This year, the theme is Symbiosis.  (definition:  the living together in more or less intimate association or close union of two dissimilar organisms ; a cooperative relationship as between two persons or groups).   Anyone who wishes to participate is welcome.  Wear a costume or a mask, make a float, bring bells, umbrellas, or flowers.  Meet up on lower Melwood Avenue (near Pittsburgh Filmmakers) at noon; the parade starts at 1:00 p.m.  Check out the parade website for more information.

Find out what kinds of buildings are planned for the Fire Site!

The third public meeting for the Fire Site Development will take place at Pittsburgh Filmmakers, at 477 Melwood Avenue just outside Polish Hill, on Tuesday, March 11 from 6:00 – 8:00 p.m.

Ask questions, share your impressions, and learn about how your input was incorporated into the final design.  This is the third and final public meeting, and the last meeting before the developer decides whether to move forward with buying the land and building anything there. 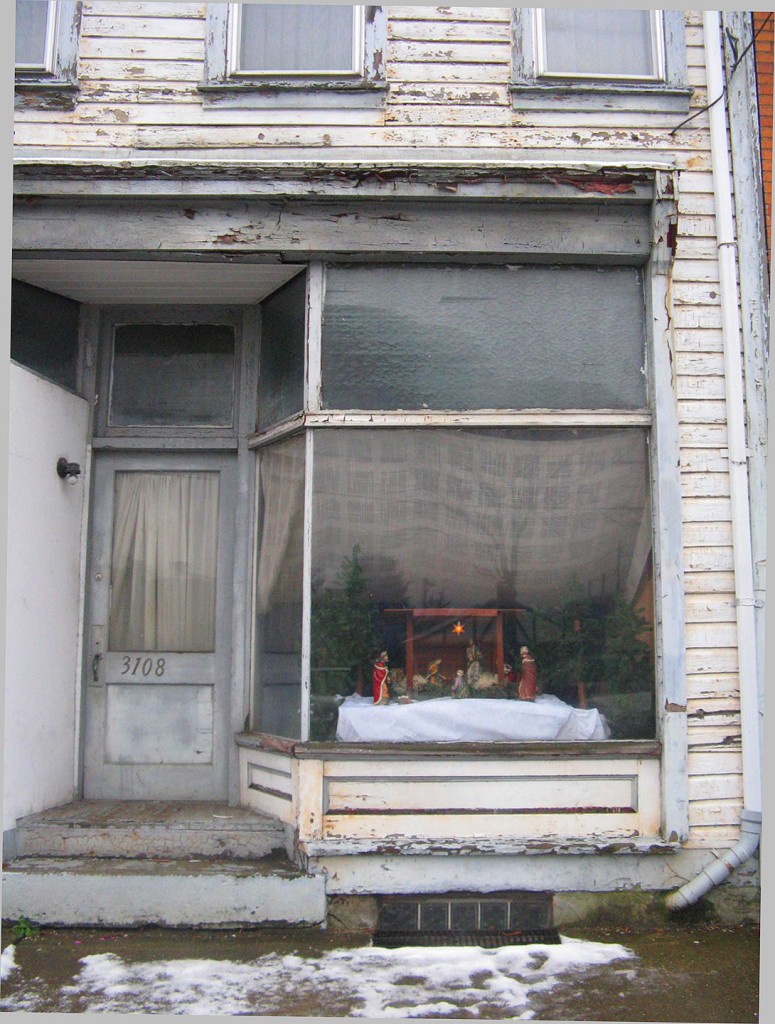 The lights are up around the neighborhood, and the cold and snow makes it feel very Christmas-y.  The spirit of the season is expressed in many ways, from the lights on homes, to the monument tree.  Here is a lovely small nativity scene, in an old storefront on Brereton Street. 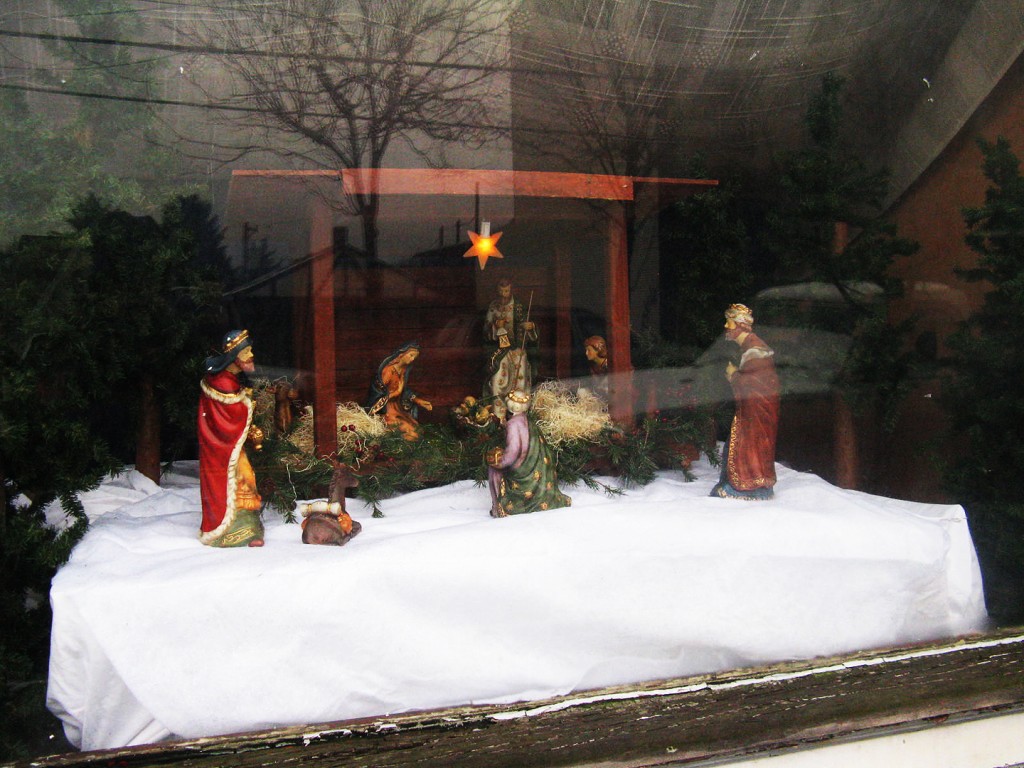 And you may have noticed a spot of light on color up on the old billboard frame on a building on Bigelow Boulevard, just inside the Polish Hill border by the Bloomfield Bridge: 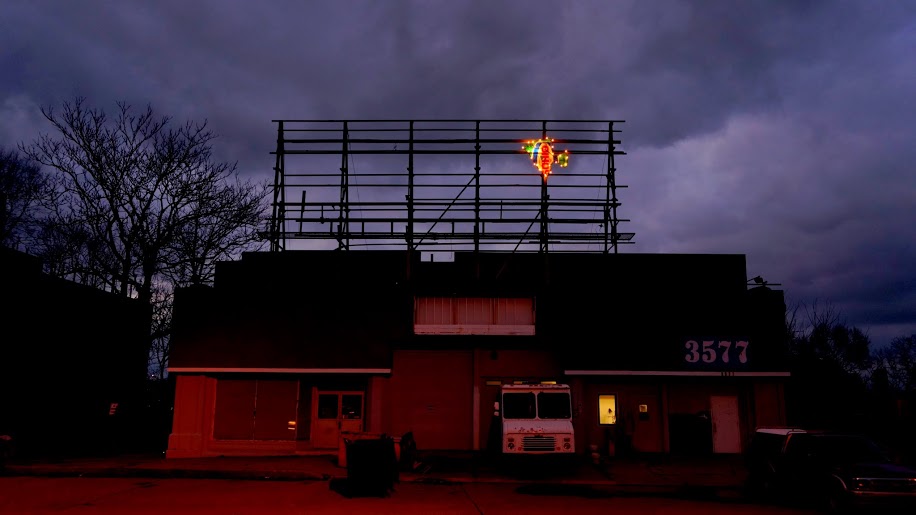 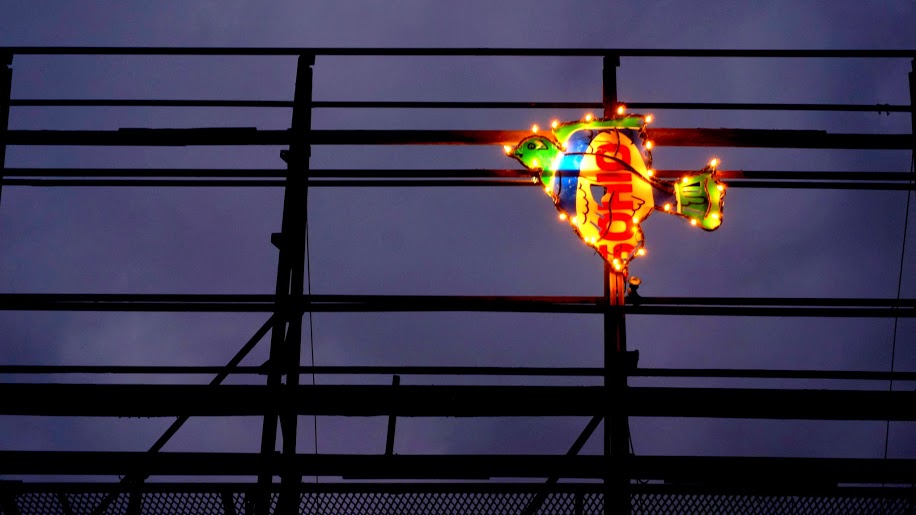 Merry Christmas, Happy Holidays, and all the best of the season to everyone!

(Photos of the Brereton Street storefront creche by Leslie Clague, photos of the Bigelow billboard dove by Mark Knobil)

Here’s a really fascinating mapping website to check out:  Pittsburgh Historic Maps is based on city maps of Pittsburgh, going back to 1833.   (For more recent years, there are aerial photos.)  You can zoom in on any neighborhood, or part of a neighborhood.  There’s a timeline with a little slider (visible in the top of the map image), which you can move to watch as the selected area changes over the decades.  Street names change, houses and buildings appear, or disappear.  And as the view fades from one map from the other, you can see both at once (as in the image below).

You can look at any section of the city, but of course we wanted to look at our neighborhood.  We zoomed in on the area that is now the central streets of Polish Hill.  Below is a series of screen shots of the same section, from the mid 19th century to last year.

Here’s the view between the 1840s and 1870s, when this area was called Springfield Farms and Minersville.  There wasn’t much there yet — West Penn Hospital, the railroad.  Just for comparison, there are some more familiar landmarks — like the s-curve of Herron Avenue — visible in the shadow of the 1870s map coming into view:

Here is the same area around 1870 — lots of areas plotted out, but not many buildings.  Notice West Penn Hospital on the lower left — that area is now West Penn Park: 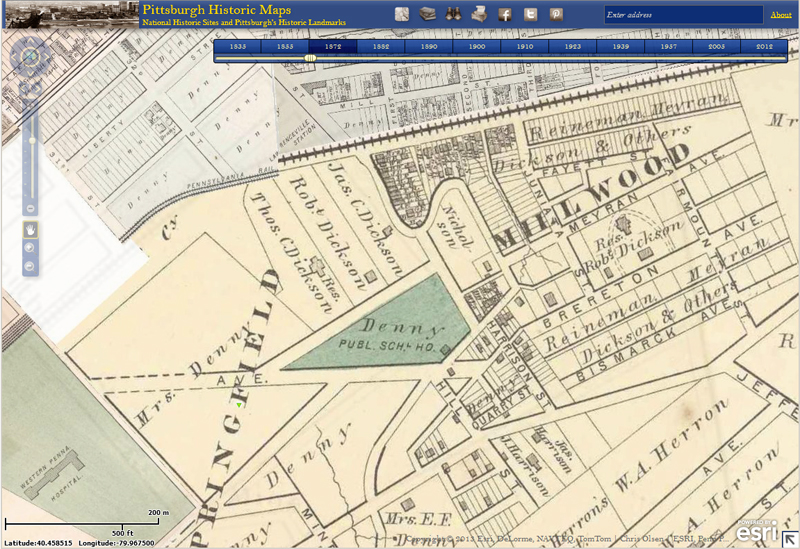 And again around 1880, with a lot more houses and buildings (the little yellow boxes): 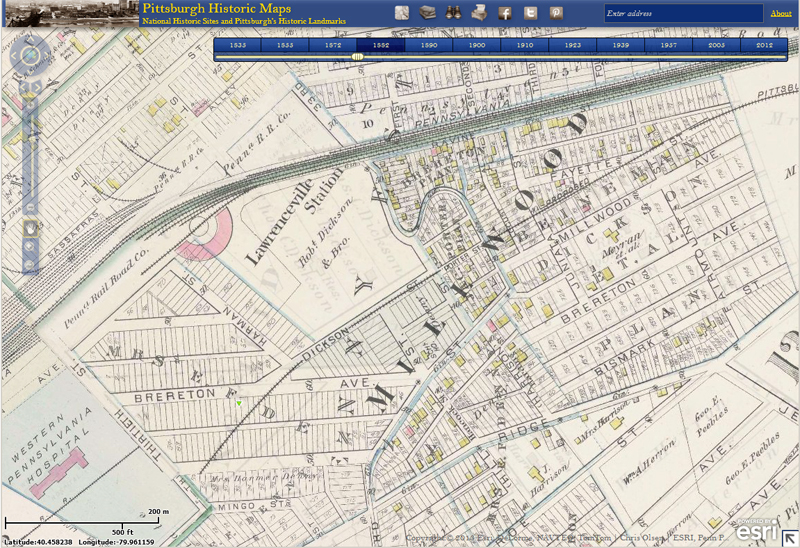 Around 1890.  There’s a brick factory where the church is now, and Brereton Avenue is now Jones Avenue: 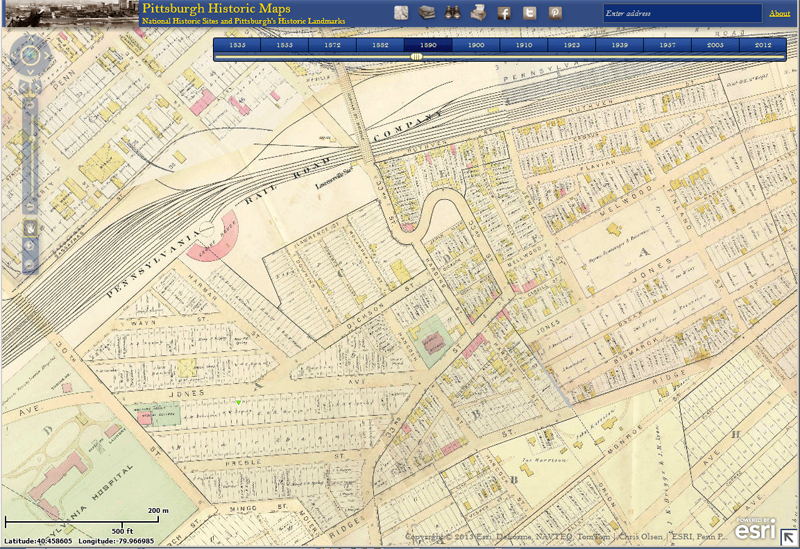 Sometime after 1905 — the church and the school are now there.  What was 33rd Street 10 years earlier is now Herron Avenue.  Millwood Avenue has become Melwood Avenue, and a bigger thoroughfare, Grant Boulevard, has been created: 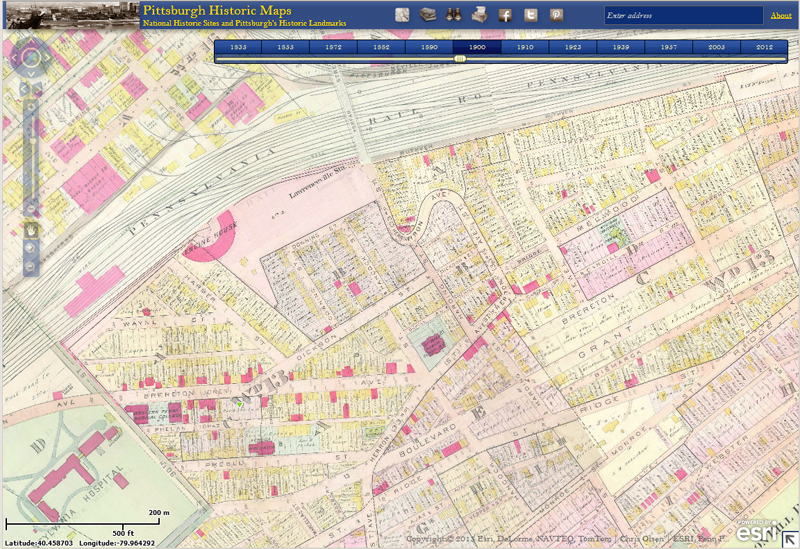 At this point, the maps have specific dates on them.  Here’s the same area, in 1910: 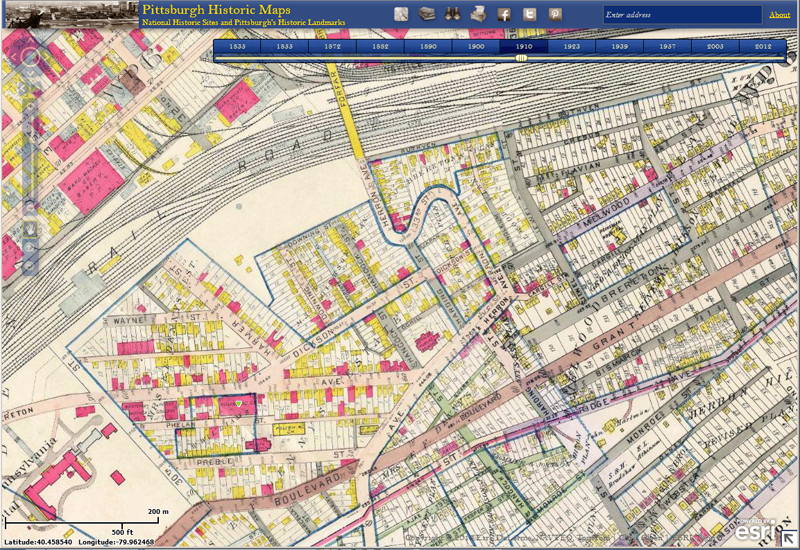 By 1923, West Penn Hospital is gone, and the area is now a park and playground.  Dickson Street has been renamed Dobson Street.  Grant Boulevard has become Bigelow Boulevard: 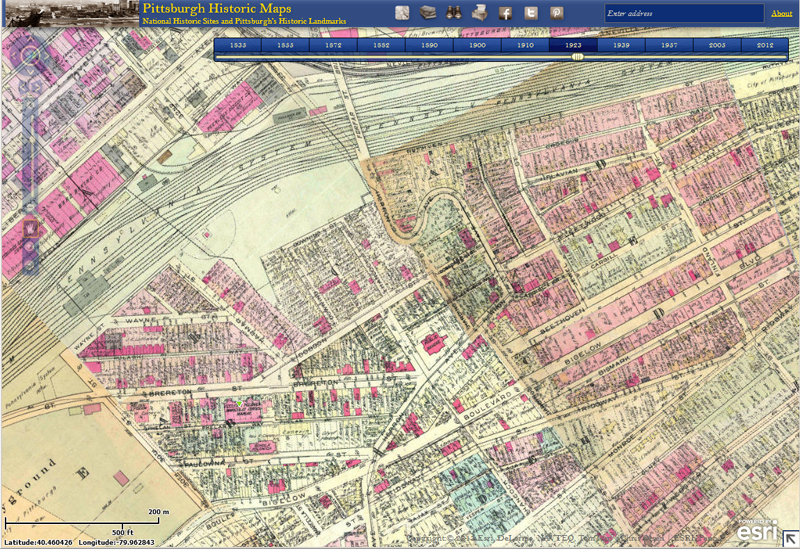 The view switches to an aerial photograph in 1939: 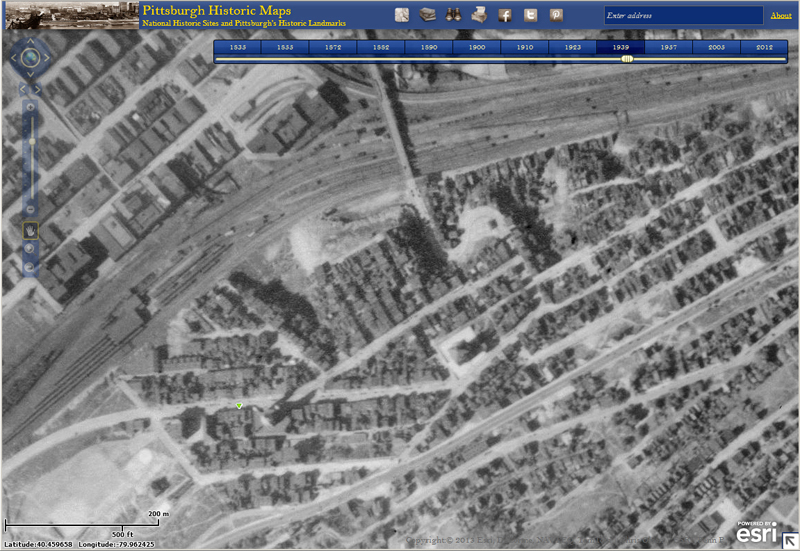 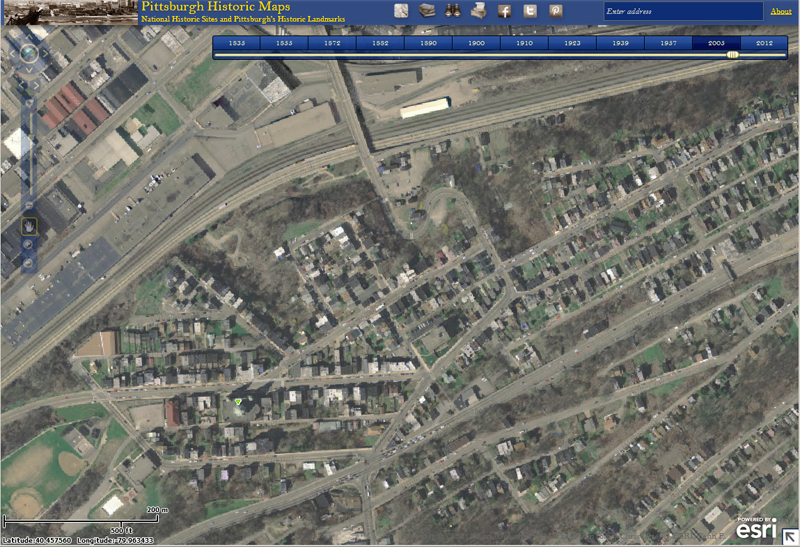 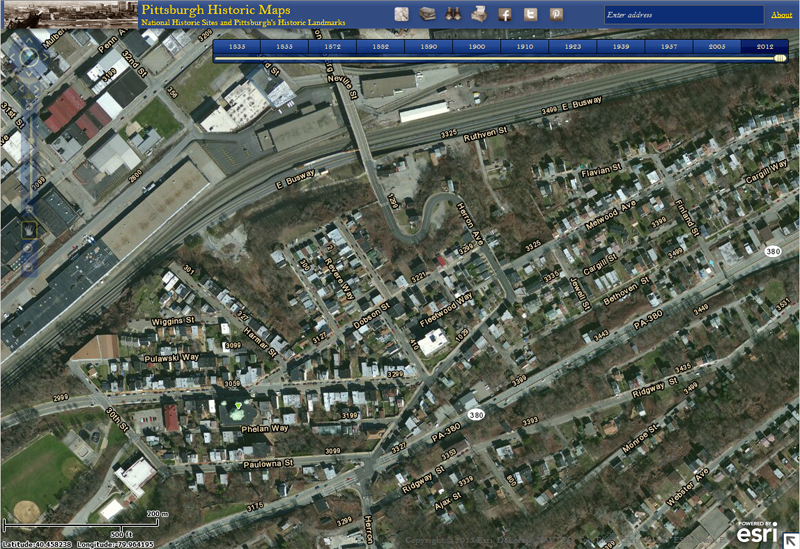 Again, the website is Pittsburgh Historic Maps.  Check it out when you have some time to spare, because you’re likely to get absorbed looking at how the city has changed over time.