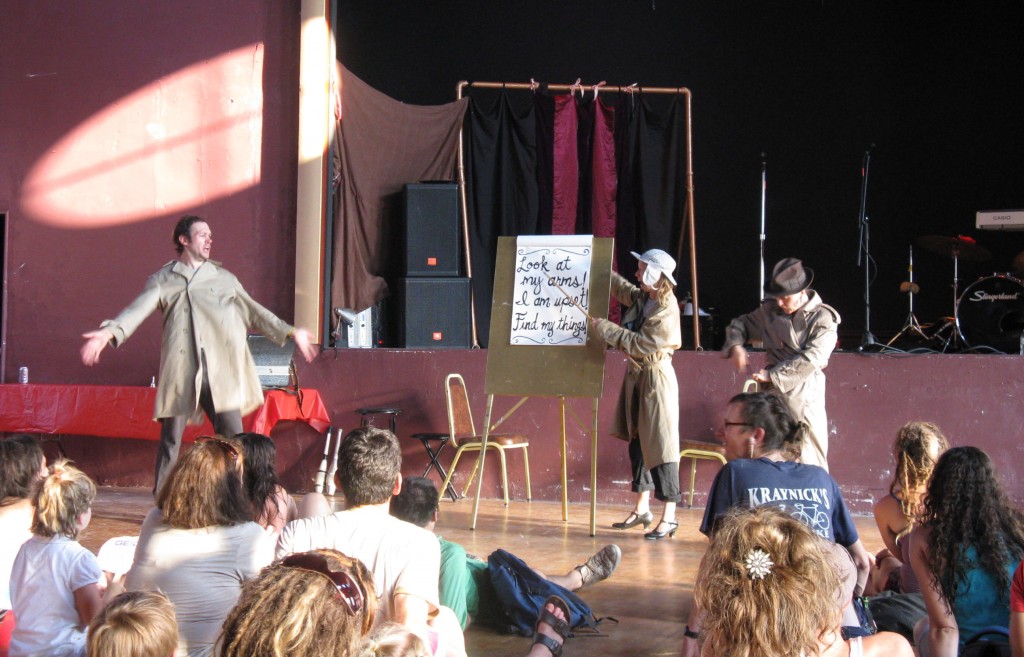 As previously mentioned, last weekend, Polish Hill was all about the festivals.  The Free4All Music Festival, which ran for two days, was the newest.  The festival was produced by Project 53, the nonprofit musician’s resource center on Melwood, with a grant from the Sprout Fund. 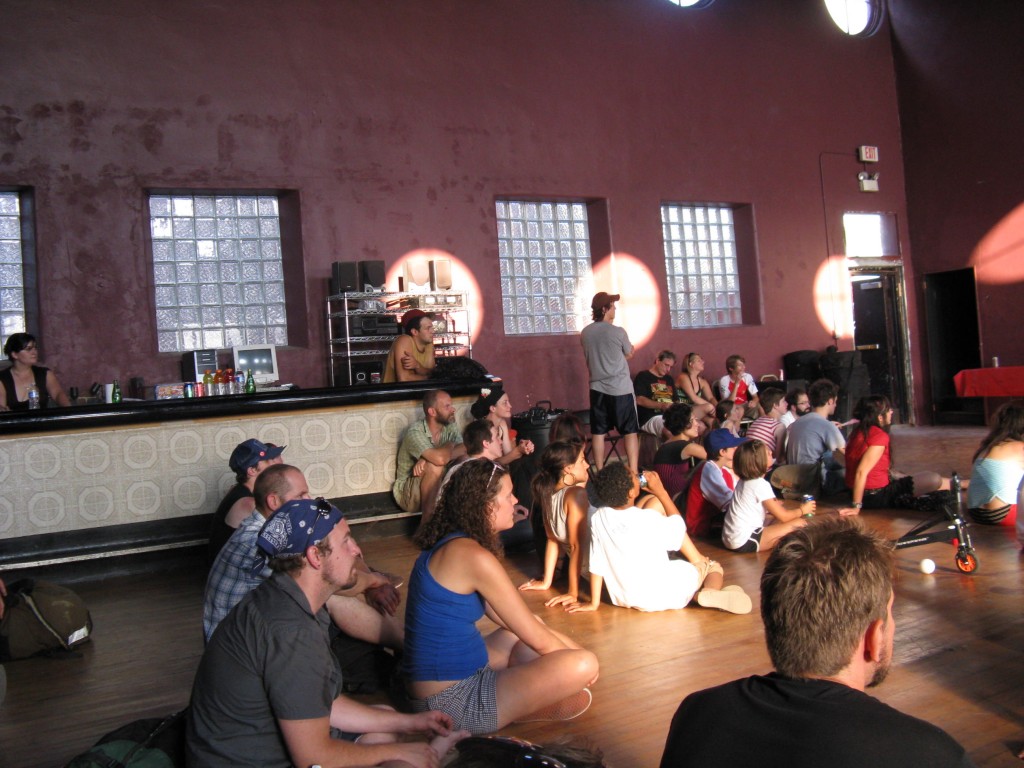 During Free4All there were performances at West Penn, the Falcon venue, and the big tent at the arts festival.  There were also music workshops at Project 53, on topics such as xylophone, do-it-yourself musical instruments, and the accordian.  Dozens of musicians participated, mostly from Pittsburgh, but some from as far away as Minnesota and North Carolina.

Both of the above photos were taken at the performance by the Runaway Circus, from Asheville, North Carolina.  The Runaway Circus is a vaudeville-style act that includes slapstick, music, dancing, magic tricks, juggling, acrobatics, and more.  The performance, which attracted an appreciative audience and lots of kids, took place in the Red Theater at the Falcon Venue, in the former Emma Kauffman Clinic and Falcons Club on Brereton Street.

A couple weeks back, Staffski posted about movie nights at Project 53. Well, it looks like the first date has been set and the first movie selected —
SUN JAN 31 – 7pm showing  Touch the Sound: A Sound Journey with Evelyn Glennie (2004)  this movie is not rated but is appropriate for all ages

While still a student, Evelyn Glennie learned that she was going deaf. Rather than abandon her study of music, in which she had shown such talent, she instead turned her focus toward percussion instruments and developed her ability to feel the sound through her body. This documentary follows her as she performs in New York, Germany and Tokyo, sharing her insights into the nature of music and the ways in which we experience it.

The Devil and Daniel Johnston
Don’t Look Back (Dylan)
Buena Vista Social Club
In Heaven there is no Beer?
The Kids are Alright
Not Bad for a Girl
Lomax the Song Hunter

Project 53 also offers open hours every Wednesday from 6-8 pm for usage of the practice space, instrument library, or anything else you can think of. And there always seems to be something brewing at Project 53. According to a recent article —

… Project 53, a converted Polish Hill house, is taking advantage of the opportunity to introduce itself to Pittsburgh fans of both music and community. Project 53 fills a void that most didn’t even know existed — a family-friendly resource for free music. Neither concert venue nor bar, it’s intimate (capacity is around 80), with a potluck supper and good folks playing great music. Read the entire City Paper article

Plan a visit sometime soon. Staffski is sure that you will thoroughly enjoy the experience.