On Wednesday July 29, a new portion of the PennDOT Bigelow Boulevard roadwork will begin, which will entail new lane closures and detours.  Here is the informational Traffic Advisory from Oakland Transit Management Association, which is the public contact for the project.

Beginning at 6 a.m. on Wednesday, a 23 consecutive day, around-the-clock closure of southbound Bloomfield Bridge will occur.  The bridge will be closed to southbound traffic at Liberty Avenue.  Traffic will be detoured.

To help keep motorists informed as work on the Route 380 project continues, remember to sign-up to receive eAlerts for the latest news and project updates OR visit the project information website at bigelow-baumblvd.otmapgh.org.

On Saturday July 11, a new portion of the PennDOT Bigelow Boulevard roadwork will begin, which will entail new lane closures and detours.  Here is the informational Traffic Advisory from Oakland Transit Management Association, which is the public contact for the project.

PennDOT District 11 is announcing a new traffic configuration will occur on Route 380 in the City of Pittsburgh, Allegheny County, will begin on Saturday night, July 11 weather permitting.

Additionally, on Saturday, July 11, a long-term single-lane closure will occur in both directions on the structure that carries Route 380 Baum Boulevard over the Neville Street ramp to the PAT busway in between Morewood Avenue and North Craig Street to continue structural steel work activities. This long-term restriction will be in effect through December.

Motorists are advised to use caution, slow down and be prepared for changing traffic patterns when traveling through the area.  Work zone safety is everyone’s responsibility.

Visit www.otma-pgh.org  for more information or to sign-up to receive eAlerts (updates, news, ETC) about the project.

The PennDOT Bigelow Boulevard roadwork starts tomorrow, June 30.  Here is the full text of the first Traffic Advisory from Oakland Transit Management Association, which is the public contact for the project.

Beginning at 2 a.m. on Tuesday, June 30 the ramp from eastbound (outbound) Bigelow Boulevard to the Bloomfield Bridge will close to traffic for 44 consecutive days for roadway reconstruction.  Traffic will be detoured.  Posted detour:

— Motorists will continue eastbound on Bigelow Boulevard past the ramp

— Turn left onto Liberty Avenue and follow to the Bloomfield Bridge

Single-lane restrictions for structural steel work will begin at 6 a.m. on Tuesday, June 30 on the Baum Avenue Bridge over the PAT busway.  Long-term single-lane closures on the bridge will be implemented at a later date.

Additional work in 2015 that is currently unscheduled includes:

Roadway reconstruction of North Craig Street between Bigelow Boulevard and the Baum Avenue Bridge.  A 91 day closure will be required.

The project will conclude in August of 2016.  Work occurring next year includes the deck replacement of the Baum Boulevard Bridge and the milling and resurfacing of Baum Boulevard between the bridge and Morewood Avenue.

To access PennDOT Traffic Cameras in the corridor visit http://www.otma-pgh.org/resources/links.

Visit 511PA.com or call 511 from any phone to check traffic conditions on major roadways before heading out

The OTMA will have a project website which should go live soon. 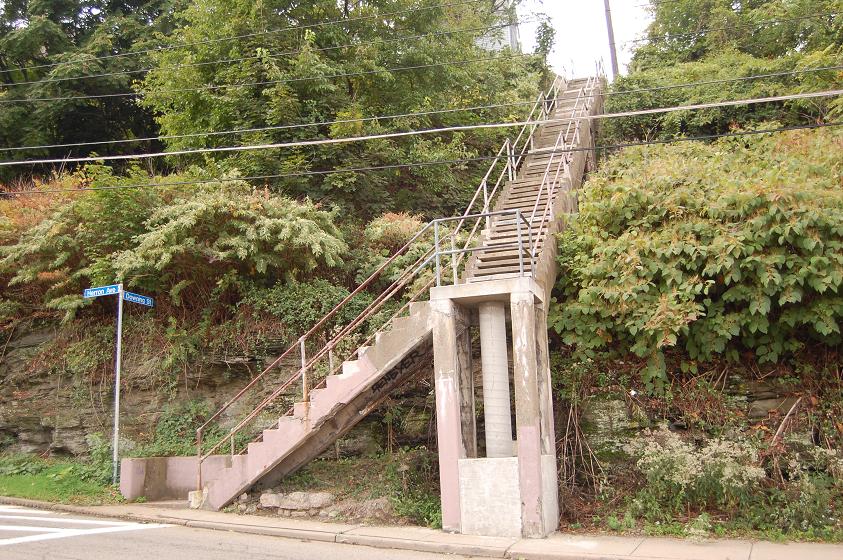 The Department of City Planning is in the process of conducting its first ever comprehensive data collection on the city’s 700+ public steps.  The collected data will be used to assess conditions and prioritize the steps for maintenance and repairs.  Surveying the 700+ steps in 66 of the city’s 90 neighborhoods will be an extensive process.  To expedite this process, the Department of City Planning seeks volunteers from local neighborhoods to survey the condition of the steps and to provide city officials with valuable insight into the usage and condition of their local steps.  Volunteers will work in teams of 3, each an assigned task to ensure consistency of data.  Training and an instructional field guide will be provided to all volunteers.

— Dedicate a few hours on the date of the survey (TBA)

— Walk up and down several sets of steps

— Survey the state of the treads, rails, and structural supports

— Take photographs of the steps

Interested in helping?  Fill out the Volunteer Form. See the Step Survey Flier and Field Guide for more information, or email Catherine.crevecoeur@pittsburghpa.gov.

This page also features a map with all the City steps.

(Photo of the Downing – Herron steps, from this site) 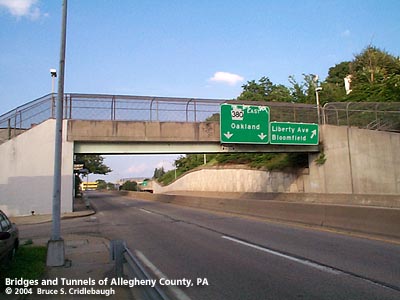 On June 22, PENNDOT will begin a two-year infrastructure and maintenance work on Bigelow Boulevard and Baum Boulevard.

PENNDOT will be holding a public informationsal meeting on Tuesday, June 23rd at 7:00 p.m. at the Courtyard Marriott at 5308 Liberty Ave (at Aiken). This is a public meeting for residents to learn about the scope of the project including its tentative timeline, detour routes, and regular working schedule. It will also provide an opportunity for residents from affected communities to ask questions and raise concerns.

Supervisors of the project will be providing regular updates to District 7 Council office as well as being open to questions/concerns from the community throughout the project. Residents will have an opportunity to meet the supervisors and others associated with the project at the June 23 meeting.

For an overview of the project, read the Post-Gazette article here.

(Photo of Bigelow Boulevard by Bruce S. Cridlebaugh, from PghBridges) 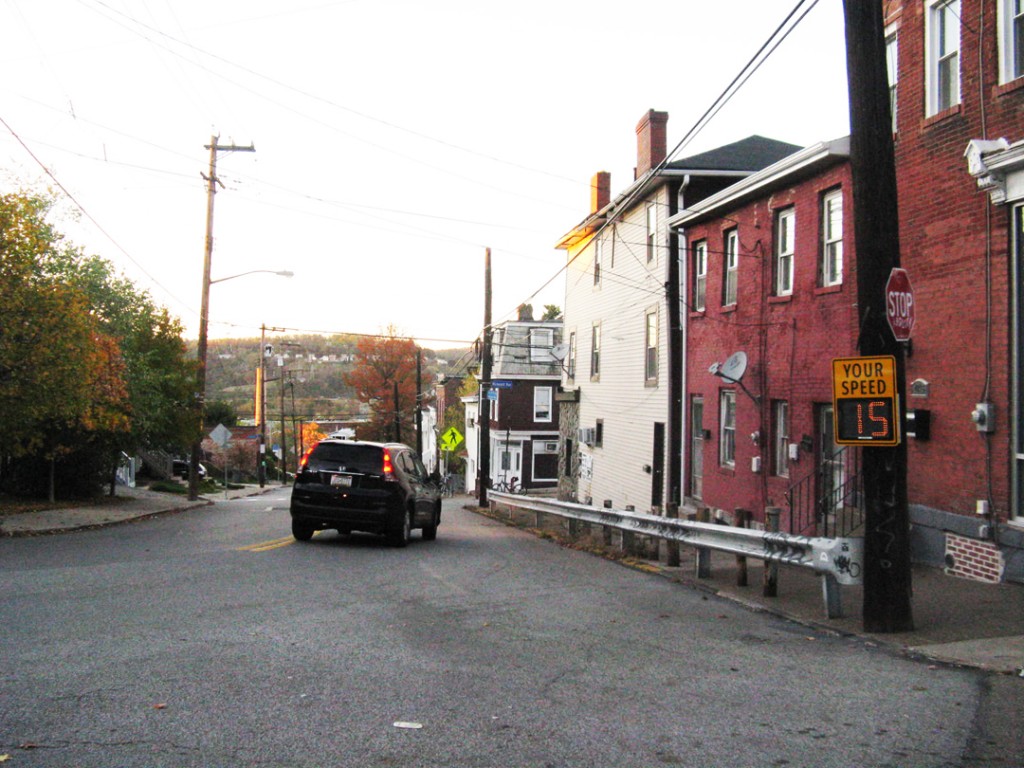 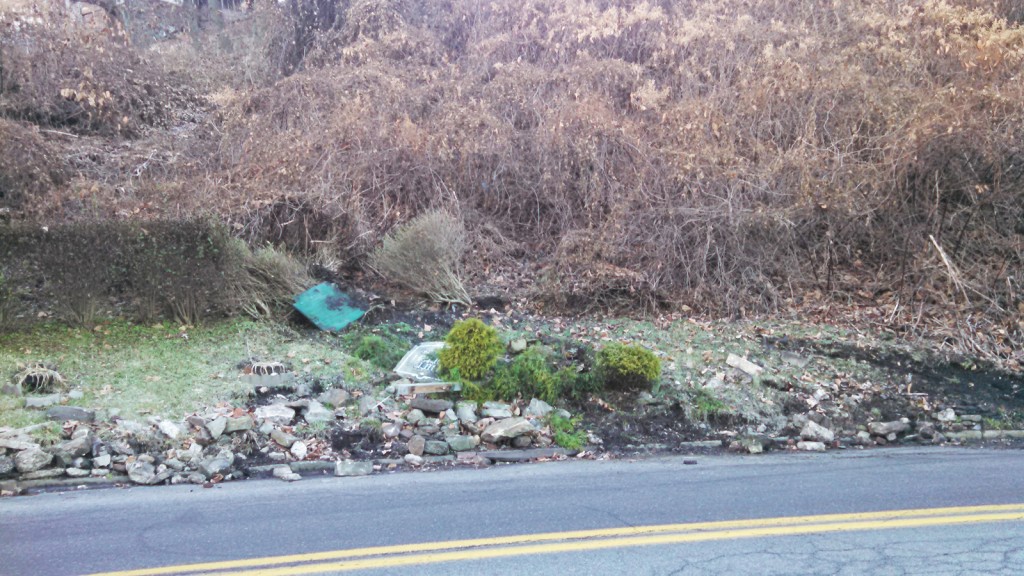 Last night a car drove up on the hillside at the Herron Avenue S-curve, knocking over the neighborhood sign and flattening the bushes and plantings. This part of the curve is hit frequently; the stone wall was badly damaged by another vehicle this fall. This is also where pedestrians cross, so the frequency of accidents is of particular concern.

Incidents like this highlight the need for long-term solutions to the problem of speeding and cut-through traffic. The issue is complicated.  Roads are public thoroughfares and Polish Hill’s location means that it’s the only quick route between certain points, so vehicles are going to come through. City traffic engineers and Zone Traffic Division are looking at the problem and have advised us that the best way to address the issue is to make it difficult for drivers to speed. If it’s not as quick and easy to cut through Polish Hill, more drivers will stay on the main roads, and the vehicles that do come through will move more slowly.

We’re collecting feedback from residents in order to see what traffic calming measures they want, and where, with the Polish Hill Traffic Calming Survey. The majority of responses thus far support speed humps (not speed bumps, which are higher). The most-requested location is Melwood Avenue, followed by Herron Avenue and Paulowna Street, all streets that are particularly affected by cut-through rush hour traffic.

Another way to support traffic calming solutions is to file a 311 report. Let the City know the impact that speeding and cut-through traffic have on you, and what solutions you want to see.

Some of the most difficult issues facing our neighborhood are related to traffic, particularly the number of vehicles that cut through Polish Hill and the speed at which many drivers move through our streets.  We’ve been working with Zone 2 traffic division, District 7 Council office, and the City of Pittsburgh to find ways to slow down and perhaps reduce the traffic that comes through our neighborhood.

To request traffic calming improvements such as crosswalks, signage or speed humps, we need to have data to make the case, including as much input as possible from residents.  To that end, we’ve created a traffic calming survey.  If this is an issue you care about, please take a few minutes to fill out the survey.

Fill out the survey online, or pick up a paper copy at the PHCA office.

And if you use the East Busway, you might want to check out this mindmixer document from GoBurgh.  You can add your own ideas to the document, which was created for residents to talk about what they like and don’t like about the bus way and the areas surrounding it.

Water issues still cause problems on Phelan Way today, but things have been worse:  As this photo taken on September 11, 1907 shows, once Phelan Alley was nothing but mud.  (We’ve posted this before, but on the 107th anniversary of the photo, and with a very similar cloudy and misty today, it seems fitting to share it again.)

A little over a year later, on October 12, 1908, the street had been regraded and covered with gravel. 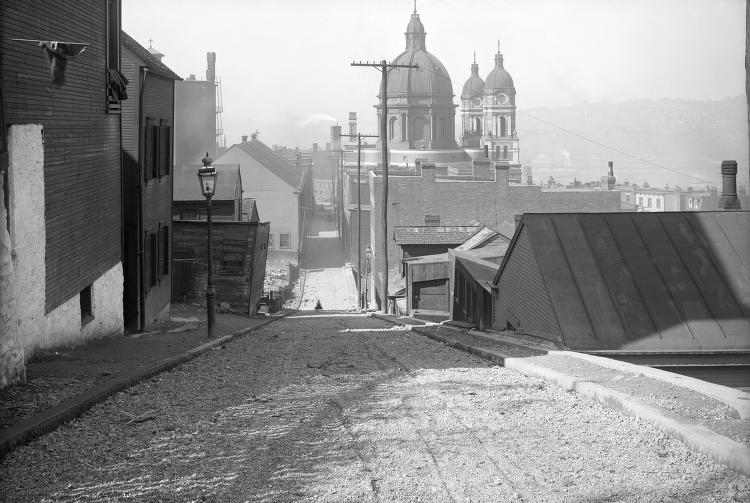 The view from the other end of the street:

(Photos from the Historic Pittsburgh image archive.  Click on photos to see a larger image)

Transit riders and local citizens are invited to share their vision for the future of public transportation in our region by visiting Port Authority’s new community engagement website, Forward Thinking.  The site presents a variety of questions on topics including capital projects, barriers to transit use, and accessibility for seniors and riders with disabilities. Participants can share their thoughts or weigh in on ideas submitted by others.

The website launch also coincides with this week’s Urban Land Institute (ULI) advisory panel on public transportation. The ULI panel will be focusing on strategies for improving transit, interviewing local officials and stakeholders, and presenting its recommendations at the end of the week.

Riders and community members who do not have internet access are invited to share their vision of a modern public transportation system by mailing their ideas to:

(Above: the East busway as it passes through Polish Hill.  Photo by Patrick Singleton)