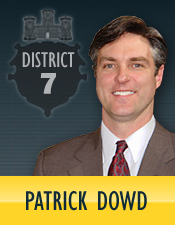 District 7 Councilman Patrick Dowd brings his Council to Go meeting to Polish Hill every other month.  The next Council to Go is this evening, Wednesday January 11, at 7:00 p.m.  The meeting will be held at the PHCA office, 3060 Brereton Street.

We received a late update on this meeting; District 7 staff informed the PHCA that those interested in attending Council to Go to get an update on the property tax reassessments might be better off attending the meeting on the reassessments at 6:30 p.m. this evening at West Penn Hospital.  They tell us that meeting will be attending by the County Executive who has more up-to-date information.

Although the reassessment meeting was organized by Councilman Peduto’s office, it is physically in Council District 7 and many District 7 constituents will be in attendance, so Councilman Patrick Dowd will be in Bloomfield at 6:30 and then come to Council to Go a bit later.  In the meantime, District 7 staff will be at the PHCA to take straight forward constituent complaints.