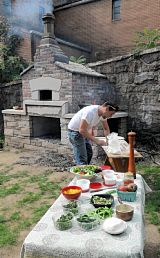 We are excited to create a space for the community to come together, bake bread, pizzas, traditional Polish recipes, and to gather around a (controlled) fire and share stories.

Right now, we are thinking that there would be designated “fire-tenders” who would volunteer for weekend shifts for a monthly bread baking. If there is enough interest perhaps the baking could happen every other or every weekend.

This project is still in the beginning stages. We are currently trying to nail down a location and then go from there. Currently, we are looking at a lot on Dobson and some other vacant lots around the neighborhood. If you have any location suggestions or would like to be a part of making this happen for our neighborhood, please contact the PHCA. From the Polish Hill Voice, May 2009 edition

Please join us at Gooski’s in Polish Hill on December 18 for Bands for Bread, a fundraiser to support the construction of a Community Bread Oven in Polish Hill. Once it is built, the oven will be open to all members of the community. The PHCA Community Oven Committee looks forward to seeing you at the event. Below is information about the bands that will be playing. Please feel free to contact us at 412-681-1950 or by email at phcapgh@gmail.com if you want to know more. You can also find out more about the PHCA’s efforts for the bread oven here.

We are pleased that House of Assassins will be joining us for the evening. In a review for Your Days are Numbered, indieville says —

This impressive slab of vinyl brings me back to the glory days of underground rock. Pittsburgh’s The House of Assassins weave pedal steel into hard-boned rock ala The Dream Syndicate, Dead Moon, and Killdozer. Perhaps it’s the vinyl talking, but this is the type of thing I’d expect to find reviewed in Puncture or Option circa the late eighties. Side A combines raunchy guitars and rough, Michael Gerald-meets-Steve Wynn vocals to produce gritty rock music inflected with a country flair. The proceedings have a dishevelled quality to them, attacking the ears like a toaster dragged under a bus. This means the emphasis is on chaos rather than melody, although the songs are sufficiently hook-y to achieve the warmth of familiarity over repeated encounters.

Local favorite, The Chad Sipes Stereo, will also be playing at Gooski’s for the fundraiser. The following is from the album notes for A Working Life —

Formed in Pittsburgh, Pennsylvania in early 2005, The Chad Sipes Stereo was built around the vision of second-generation contractor Chad Sipes. He set out to form a band that embodied what he was experiencing in his everyday life; the wind in his face, the sweat on his brow, the mud on his boots, and the beauty of the world from high atop a ladder. It is this unique worldview that is the creative force behind The Chad Sipes Stereo.

You can read more about the album on CD Baby. Along with the MySpace page, Chad Sipes Stereo has their own site here.

joy toujours and the toys du jour play mixed folkcore, i.e. you-are-beautiful-core, or music you can play while your four year old is sleeping

joy toujours is Project 53, Polish Hill’s musician resource center, located on Melwood Ave. We are happy for his support at many of the events on Polish Hill. He played for us at the PHCA 40th Anniversary Party and played an event at the West Penn Recreation Center pool. Thanks, joy, for all of your efforts.

Joy Toujours programs Belvedere’s in Lawrenceville. He lives on Polish Hill, has a 5-year old daughter, and lived as a hobo for six years. He wrote into Locally Toned saying that his idea was “from a song I wrote with the ukelele and the clip says ‘If you dont like today there’s always tomorrow, if you don’t like the rain you’re always just a sunny day away.’ Pittsburgh = rain = I think this is local enough, plus it was written by a local songwriter, plus I busk on the streets of Pittsburgh frequently, so it is technically a sound you would hear in our ‘nature.’ If we record I would suggest somewhere downtown to catch traffic and conversation in the background.” From Locally Toned

Also, please check out this great video from the West Penn pool party