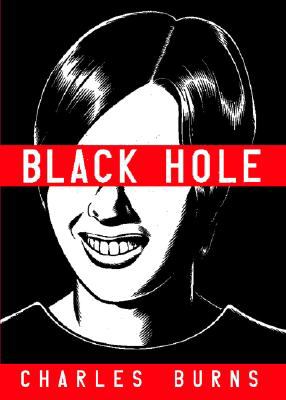 This summer, the Carnegie Library of Pittsburgh has been holding a new kind of book discussion: Book Buzz.  What makes Book Buzz different?  The intent is still to discuss great books and encourage lively conversation about them.  But the books are a little different: edgy memoirs, graphic novels, contemporary horror.  And the locations are very different: bars, restaurants, coffee shops.

Next Monday, Book Buzz comes to Lili Coffee*Shop, 3138 Dobson St. in Polish Hill.  The book they’ll be discussing is Black Hole by Charles Burns.  Black Hole is a highly regarded graphic novel (originally published as a series of comic books) which won the Eisner, Harvey, and Ignatz Awards.

According to the description provided by a certain very large online bookseller, Black Hole is set in suburban Seattle in the mid-1970s.  “A strange plague has descended upon the area’s teenagers. The disease is manifested in any number of ways — from the hideously grotesque to the subtle (and concealable) — but once you’ve got it, that’s it.  As we inhabit the heads of several key characters — some kids who have it, some who don’t, some who are about to get it — what unfolds isn’t the expected battle to fight the plague, or bring heightened awareness to it , or even to treat it. What we become witness to instead is a fascinating and eerie portrait of the nature of high school alienation itself — the savagery, the cruelty, the relentless anxiety and ennui, the longing for escape.”

Check out the discussion starter questions and more information on the book here, and see other upcoming Carnegie Library events here.