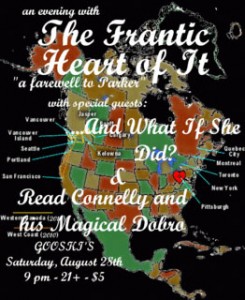 Gooski’s is hosting The Frantic Heart of It on August 28th. The performance is also a send off for one of the band members, who will be leaving our fair metropolis. —

Mark your calendars, folks…Saturday, August 28th at Gooski’s will be our last gig with Parker before he moves on to more westerly shores. Then, just 6 days later on Friday, September 3rd at 222 Ormsby, the debut of our new drummer, new songs and our seemingly more aggressive style. A great chance to compare, contrast and bid farewell to a great guy!

So, plan on being there to hear a great band and say good bye to a great guy!