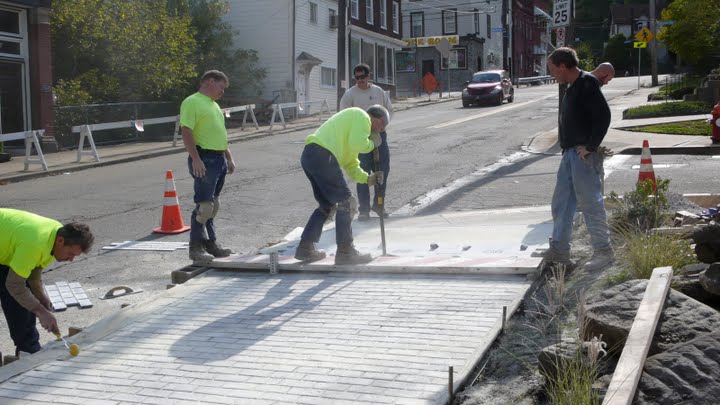 As the City crew was preparing to pour the new sidewalks at Maly Park, at the intersection of Dobson and Herron, a chance conversation led to the suggestion that we pursue getting the sidewalks tinted and stamped with a pattern that would recollect the old brick sidewalk.  Resident Myra Falisz took the lead in making this happen.  This process hasn’t been used in Pittsburgh much; it was recently used at the Frick to make the concrete sidewalk resemble cobblestones.  The crew seemed eager to try it somewhere else–and we are the lucky beneficiaries!

The process uses various dyes and stamps to  create the effect of bricks, slate, cobblestones, and other sorts of paving, is finished with hand detailing, and the result is remarkably realistic.  Instead of a boring flat gray concrete sidewalk, we now have a carefully crafted brick effect that makes the new park look even more attractive.  We send out thanks to Rick DeCarlo and crew for the suggestion and all their hard work, the City of Pittsburgh Green Team, and the Mayor’s office.  Make sure to take a walk down to Dobson and Herron to check out the result!