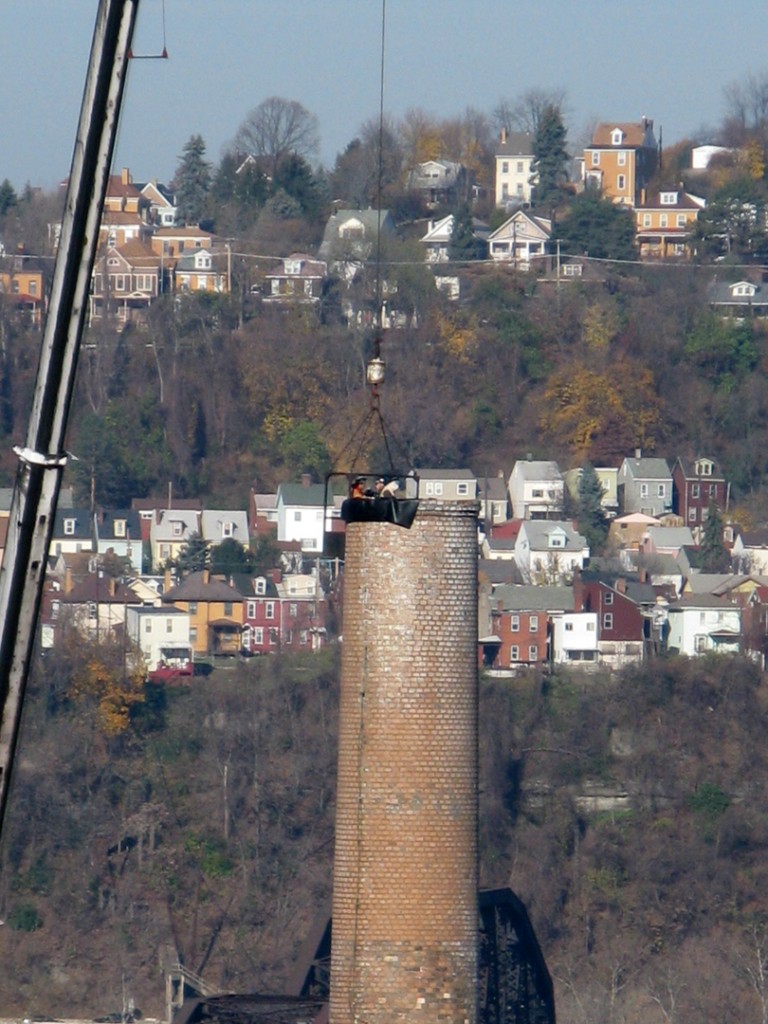 There has been further demolition work on the smokestack at the Iron City Brewery (see our post from two days ago).  Now, all the patterned brickwork at the top is gone.  Observers report that the bricks are not being removed for restoration, but simply being knocked down into the stack.  Yesterday, it was reported in the Post-Gazette that the work on the smokestack was actually illegal.  The law requires that building permits must be applied for and granted before any site modifications to historic properties.  A representative from the Mayor’s office told the Post-Gazette that Collier Development has incurred another code violation with this demolition work and will be penalized.

Today, the crane is back up and the crew is at work.  Were they really granted a permit so quickly — just one day after being told they had to stop work?  Collier Development has already incurred one code violation back in August, receiving a fine of $20,000 in district court after they demolished a number of buildings on the site without a permit.  The company stated that it was necessary for safety reasons to remove the buildings, and the smokestack did have visible damage which clearly needed to be addressed.  There was certainly a case to be made that some immediate work was needed to make the site safer and halt deterioration.  Instead, work proceeded without permits.  A pattern is starting to show here, and residents are asking us, “where is the City, where is the Mayor?”

It bears repeating that Collier Development purchased Iron City Brewery fully aware that it was a designated historic site under protection by preservation laws.  The company may not have realized how important the historic character of the site was to surrounding communities, or how many organizations and individuals cared.  We hope that all concerned parties attend the final public meeting for the Iron City Brewery development planning process.  The meeting will take place on Tuesday, November 27, from 6-8 p.m. in Building T on Liberty Avenue.  For more information on the meeting and the planning process thus far, check out the update page on the Lawrenceville Corporation’s website.

(Photo by Leslie Clague for the PHCA, taken this morning )