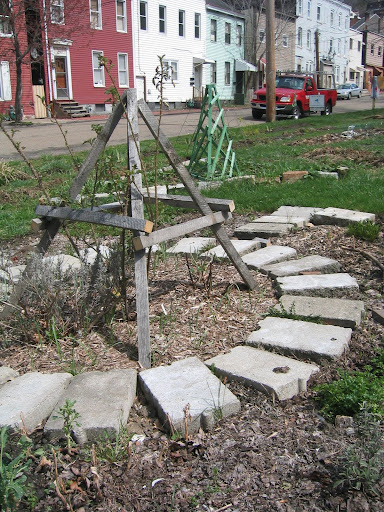 Volunteers at the Harmar Garden made a lot of progress yesterday and today, preparing the garden for the upcoming season. On the docket was trimming some trees, gathering windfallen branches, and shredding everything for mulch. The mulch will be spread around the Harmar Garden to serve as a weed killer. Some of the logs that were set aside from clearing will be drilled and used for mushroom plugs. We should see some of those in 2012.

The Harmar Garden is uniquely managed. There are beds that are mutually tended by all members of the garden. These particular beds contain perennial flowers and plants, serving as a green bank for other gardens in the neighborhood. The flowers, (tulips, blacked eyed susans) are planted to protect the garden. One plot is planted with several varieties of herbs as well as catnip for the garden mouser, a charming little black and white cat.

Last year, several raspberry bushes were transplanted to the Harmar Garden, and they are already starting to show signs of taking to their new home. Asparagus, transplanted from the Wiggins Garden, are starting to push up in one of the plots.

Gardening is a slow art, with fruition sometimes taking several cycles. Some of the preparation will only bear, like the mushrooms, after months. Planning and maintaining a garden is a joyful challenge. Many thanks to Green Team members, Paul Bowden and Terry Doloughty for their work today.