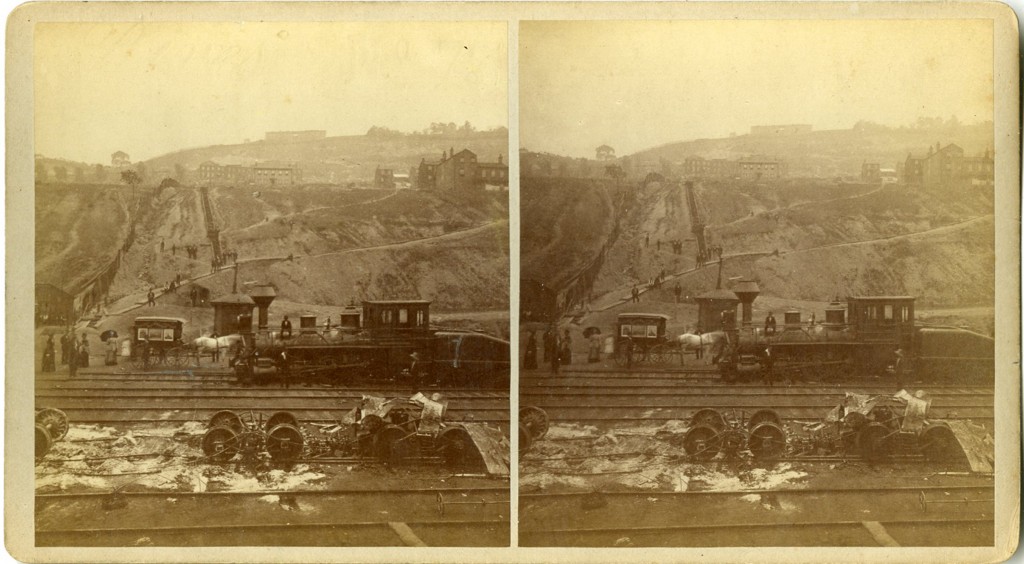 The Great Railroad Strike of 1877 was one of the most important events in labor history, spreading over ten states.  It was the first general strike in American history, and the biggest clashes of the strike occurred right here on July 21 and 22, on a site that now lies on the border between Polish Hill and the Strip District.

The strike began on July 13 in Martinsburg West Virginia, when the railroad companies began cutting salaries and wages, reducing work weeks, and increasing workloads.  The workers resisted and went on strike.  The unrest rapidly increased and spread to other cities eventually going far as St. Louis and San Francisco.  When the strike reached Pittsburgh on July 21 1877, the workers of the Pennsylvania Railroad took over the Roundhouse, located near 28th Street and Liberty Avenue, and burned the building.  The next day, the state militia struck back.  According to a newspaper account of the time, “The city of Pittsburgh was completely controlled by a howling mob, whose deeds of violence were written in fire and blood.”

Once it was over, blocks of railroad property from around 33rd Street (now Herron Avenue) to 14th Street were destroyed.  More than 40 people were dead and many more were wounded.

These stereoscopic views were taken by SV Albee in the aftermath of the strike.  The image at the top of the post should look a bit familiar despite the lack of trees — it’s a view of 28th Street, looking south.  The diagonal road visible on the  hillside is Brereton Street, leading from 28th Street up to Stockholm Street and Kenney Way. 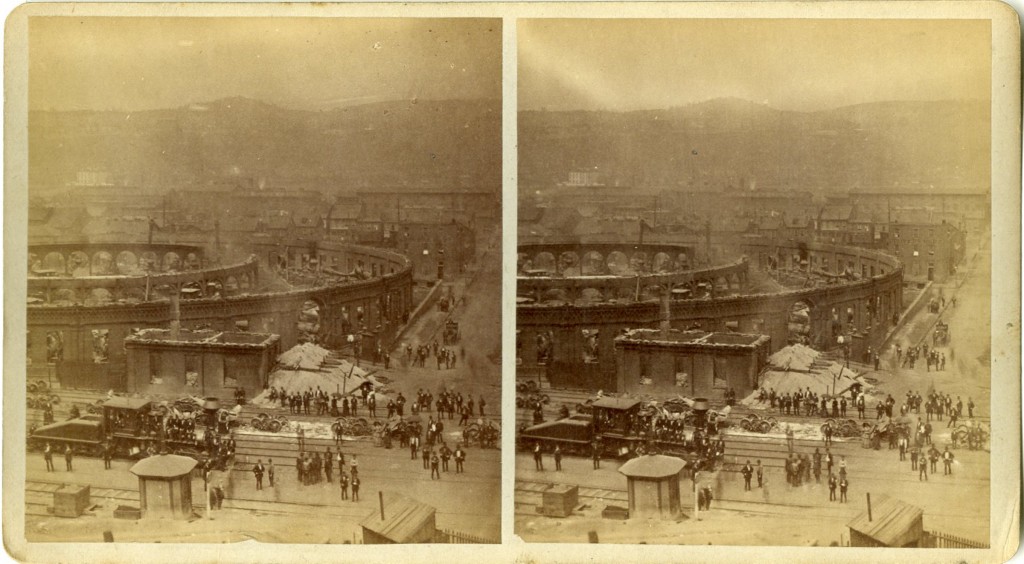 Above:  a view of the burned Roundhouse, from the hillside.  In the distance is the North Side of Pittsburgh. 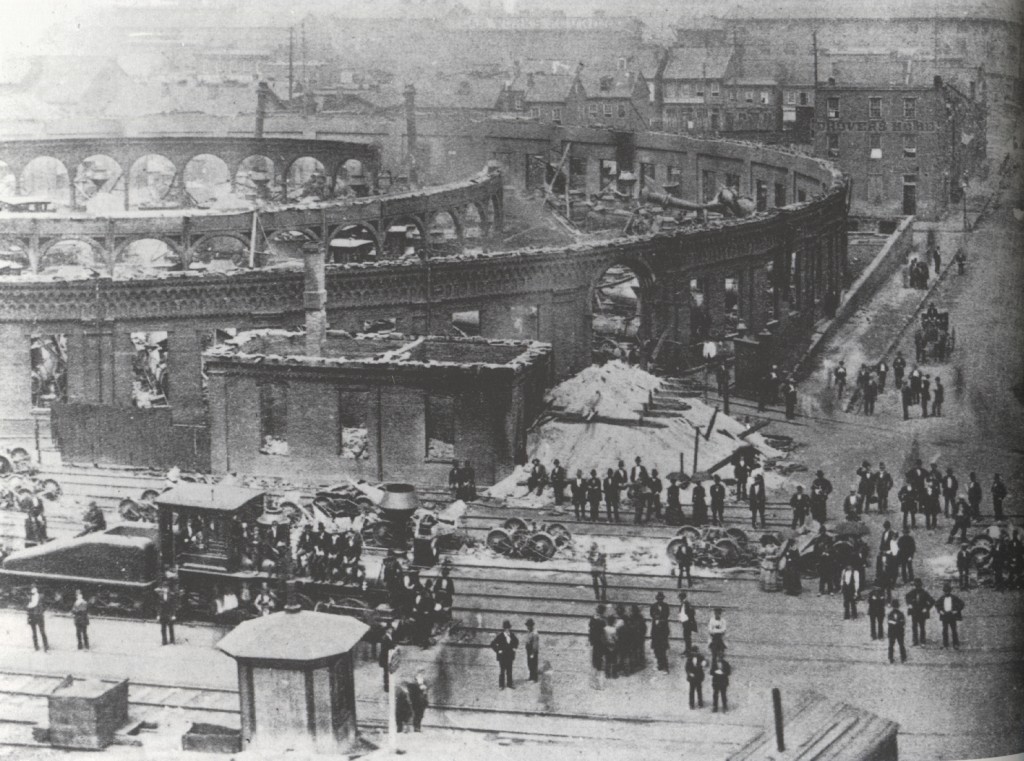 Another view of the burned Roundhouse.  In the background are homes in the Strip District.

The structure that was destroyed in the strike was replaced with another roundhouse which remained in service well into the 20th century.  That structure is no longer standing, but its former location at 28th Street is still defined by the curve of the stone wall, which was built around it. 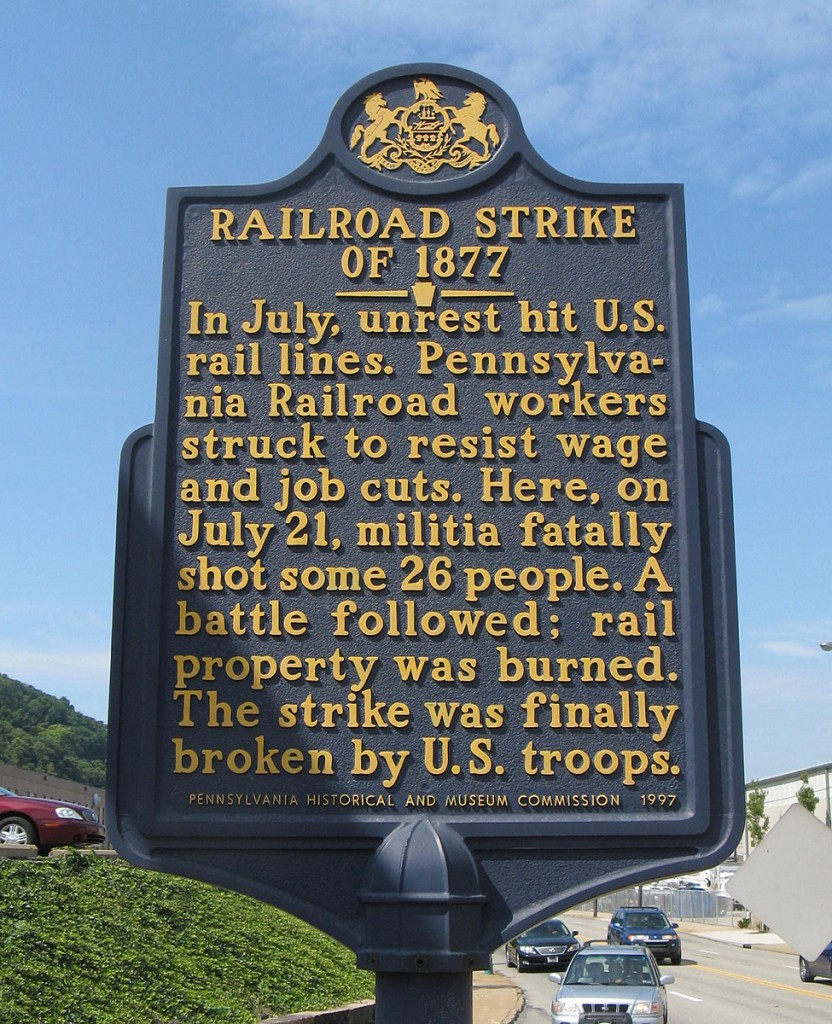 The only marker of the event is a plaque at the small traffic island at 28th Street and Liberty Avenue.  The plaque is difficult to see, and this piece of history deserves more.  The PHCA is working with the City to create a park to commemorate the Great Railway Strike of 1877 and the events that occurred at the bottom of the hill.  The proposed site for Roundhouse Park is on the north corner of Brereton and 30th Streets, on property owned by the Transit Authority.  An update of the effort to create the park will appear in the next issue of the Polish Hill Voice newsletter, coming out in mid-August.

For more information and images of the Great Railway Strike, check out these sites:

A contemporary account of the strike from Harpers Weekly, August 11, 1877  (from The Catskill Archive).   After reading this article, you’ll never look at Liberty Avenue the same way.

A set of images from Explore PA History.

Here is a set of stereoscopic views of the aftermath of the Pittsburgh strike.  (To see more detail, click on the images to zoom in.)