The Polish Hill Civic Association is pleased to announce the release of the November 2009 edition of the Polish Hill Voice. This quarterly newsletter has been published by the PHCA for 40 years, bringing news about our neighborhood to you. The edition is available for home delivery with membership in the PHCA. You can also read it online. Following is a feature article about Polish Hill’s newest public space – Maly Park. Enjoy! 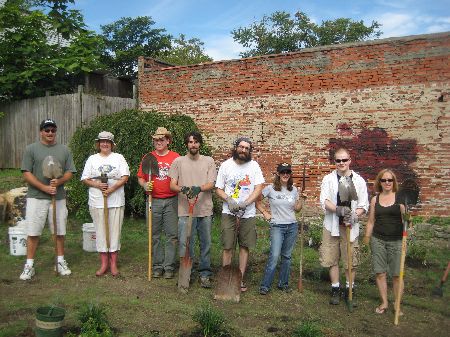 Since landing in Polish Hill a few short months ago, I have been mesmerized by this sense of place that binds us together. It’s like a crazy quilt of random patterns, shapes and pieces, strung together with the strongest of threads. I witness this interlocking technique as it weaves through every community project every day.

I’m one of the newer pieces of our village’s quilt, arriving from Southern California just as spring unfolded into summer. And living in one of the apartment’s above the PHCA is like having a front-row seat at a quilting bee called “It Takes a Village.”

Magically, and at times, mysteriously, the most incredible series of events takes place. A seemingly random cast of characters finds that common thread and a new chapter is woven. The latest one is something I fondly refer to as Big Effort, Little Park.

It began earlier this year and has grown into an intricate collaboration involving exceptional resources and community volunteers. It seems like that’s how things often
happen here on Polish Hill.

Bolstered by The Mayor’s office, the City of Pittsburgh’s Green Team and Penn State Extension, the PHCA’s own Green Team began creating plans for what is now called Mały Park. What was once a lot in need of some care at the intersection of Dobson and Herron is now becoming our little urban oasis — that visual respite to happen upon whether you are dropping off mail, waiting for a bus or simply strolling by.

The first stitch was taken when community members Josie Ramsey and Debbie Jozwiak paired up with Lauren Byrne of the Mayor’s office to submit a Green Up application. Joining in next was Joe McCarthy, the Urban Greening Coordinator from
Penn State Extension. His soil testing revealed excellent conditions for
plants to survive and thrive. The blanket of textures and
colors Josie and Debbie envisioned now features butterfly bushes, roses, decorative grasses and an additional weeping cherry tree. The selections were planted by community volunteers one Saturday morning in late August.

Our foundation fabric was shored up by Kevin Quigley and Rick DeCarlo of the City of Pittsburgh’s Green Team. Not only did they bring our green lot into shape, they also added great touches. Just like a crazy quilt is created from scraps of everyday clothing, they added a retaining-wall border using stones from the recently demolished Davis Avenue Bridge. In the same spirit, old curb stones are being transformed into benches for our residents. And these threads of historic preservation and adaptive reuse are infectious. The 100-year-old bricks salvaged from the sidewalks around the park are making their way to a future bread-oven project. A conversation about these same bricks would lead to a last-minute design suggestion for our little park. Rick DeCarlo and Tom Samstag from the City crew recommended that we replicate the color and texture of the original sidewalk within the new concrete being installed. The team had just started to work with sidewalk patterning at Frick Park and wanted to create a nod to our neighborhood’s history. That thread of an idea made its way from conversation to reality almost overnight. Truly incredible, since the city was set to pour the sidewalks in two days. Remember — the PHCA coordinators are almost all volunteers. Everyone rallied to help pause and adjust the project’s scope and schedule.
Coincidentally, PHCA president Terry Doloughty had just
spoken with Senator Jim Ferlo about the rich architectural elements still evident throughout Polish Hill. The senator mentioned his appreciation for the brick sidewalks and how they add a unique spirit to our business district.

Somewhere along the way, I humbly submitted a name for the park via Blogski. I had been talking with my father about the word “little” in Czech, which is my heritage. I soon discovered that malý (pronounced mah-lee in Czech) is similar in Polish: mały. It’s just pronounced a bit differently (mahl-wee). Those phonetic markings often distinguish the way Eastern European dialects diverge or converge. And isn’t that what a crazy quilt is all about? The variety of people, patterns and pieces of language stitched together to create something new for this village I now call home. Big effort. Little park. Mały Park.