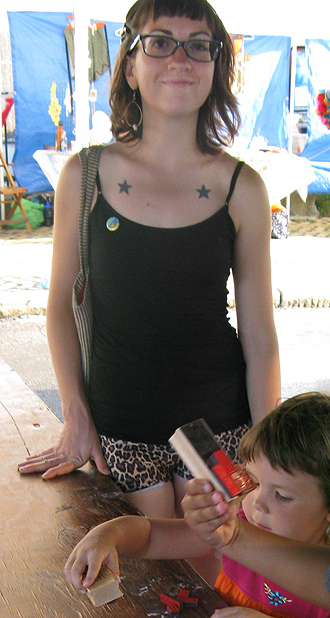 We often asked residents what sort of classes they’d like to see at West Penn, and the most common response was “yoga!”.  The PHCA was able to deliver on this in 2009, when we worked with local yoga teacher Lauren Williams and West Penn to arrange a day, time and space.  To make the class accessible to all residents, it was agreed that it would be on a donation basis, and West Penn agreed not to charge for the room.

Two and a half years later, the class is still going.  Another Polish Hill resident, Ilona Auth, took over the class in September 2010.  Ilona’s positive energy, humor, and supportive attitude have created a great class environment where students feel comfortable trying new things.  The class has remained small, with about four regulars and other attendees who come occasionally.  This year, the class was moved to a quiet, carpeted, air conditioned room off the gymnasium.

The yoga class will soon be undergoing another transition:  this evening is Ilona’s last class.  She will be moving to Rochester, New York to attend film conservation school.  After this evening, the class will go on hiatus until September, when we resume with a new teacher.

If you’ve been thinking of coming to yoga, please consider coming this evening.  The class is from 6:30 – 7:30, and it’s a suggested donation of $7.  If you cannot attend, but would like to know when the class starts up again, email us and we’ll put you on the contact list.

(Photo of Ilona Auth by Leslie Clague for the PHCA)